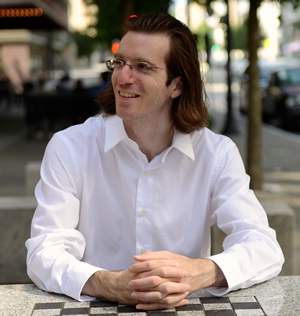 Following outreach programs in Garner and Smithfield, Jonathan Levin launched the first formal installment of this year's Clayton Piano Festival with a magnificent program of American music by important composers, some of whom remain infrequently heard. The performances were consistently superb, and the artist's informative and engaging spoken introductions gave the recital an enhanced sense of cohesion the wide-ranging lineup might not otherwise have had. It's just 20 miles from the capital to the beautifully-restored 600-seat auditorium in the Clayton Center, home of a popular and distinguished series of performing arts offerings now in its 11th year. The Piano Festival, now in its second year, is the child of Levin, an outstanding young artist we've had the pleasure of watching and hearing grow up here, starting with his debut with the Raleigh Symphony Orchestra a few years back. He's continuing to grow and develop as a prize-winning artist-scholar, and his influence may be clearly seen and heard in the truly remarkable programs of this year's offerings.

A small but enthusiastic crowd welcomed Levin to the stage following introductory remarks by Ed Carpp of the Festival's board. The opening work was "Nightfall," from [4] Roman Sketches, Op. 7, by Charles Tomlinson Griffes (1884-1920), our distinguished but tragically short-lived "American impressionist." The music suggests Ravel and Debussy but with stronger sinews and a certain angularity that Levin brought out with keen insight.

"To a Water-Lily," one of the better-known musical vignettes from Woodland Sketches, Op. 51, by Edward MacDowell (1860-1908), and his "Witches Dance," from Fantasy Pieces, Op. 17, likewise reflect European influences - not atypically, as during his era we had too little confidence in our artistic abilities here; that the composer's New Hampshire farm is now the home of a world-famous retreat for creative artists shows just how far we’ve come! These works are sometimes called "salon pieces" - short, tuneful, and well-suited to students. Levin took them to new levels with his outstanding technique and perceptive musicianship, allowing them to shine as the miniature gems they are.

George Gershwin's Three Preludes (1926) brought us to even more familiar terrain, although they are not often heard in live performances. Among the composer's recordings is a magnificent 12" 78 rpm disc of all three that set a high standard for all keyboardists who have come after him; Levin more than met the test, such as it is, with his beautiful playing.

For this listener, the avant-garde "Tides of Manaunaun" (1917) by Henry Cowell, with its amazing tone clusters and wild undercurrents, was among the evening's absolute highlights. The composer of “Aeolian Harp” (1923) and “The Banshee” (1925) gets far too little notice nowadays but was in his way as innovative as Charles Ives, so Levin's inclusion of this score was important, and there can have been no disappointments with the rendition.

Aaron Copland's famous El Salón México (1932-36), heard in a brilliant solo-piano version by Leonard Bernstein, brought the first half of the program to a brilliant close. It's noisy but of course it's supposed to be, and in some respects this scaled-down edition (as opposed to the orchestral original) allows for enhanced appreciation of the music's many appealing qualities.

Part two began with the impressive little Sonata No. 2 by George T. Walker (b.1922). The work is generally acknowledged as the composer's best, so its wide-spread neglect is hard to fathom. Levin managed to crawl inside the piece, delivering it with levels of passion and commitment that brought it to glowing life. There was more of the same during a performance of William Bolcom's Nine Little Bagatelles (2006), a set of brief and highly evocative little miniatures, some very tiny indeed. The impressions they make linger in the mind, however, like a brief whiff of perfume in a crowded room, and the finale, as realized by Levin, is truly haunting.

The grand finale of the program was Griffes' Piano Sonata, which brought us full-circle, as it were, to where we came in. Levin's commitment to this music is remarkable, and his performance of this big piece (about 15 minutes) was stunning. And the encore stayed with Griffes, extending the magic: it was "The Lake at Evening," No. 1 of Three Tone Pictures, Op. 5.

Every pianist worth his (or her) salt plays the mainstream classics (including Levin, whose most recent prize was at a Liszt competition), but it is noteworthy indeed when American artists espouse and champion American composers to the extent demonstrated in this superb recital. Bravo!

One final note: Folks who've heard of Clayton but never been there might find a visit worthwhile. On this Friday evening, there were minor traffic jams on Main Street, restaurants were packed, and conversations were lively. The better eateries are easily found in Google, and the offerings are no longer limited to the traditional comfort food this writer remembers from his childhood, when an occasional excursion to Clayton offset more frequent trips to the Garner Grill and the Toot-N-Tell. Check it out, perhaps starting Monday, February 11, when this wonderful gem of a piano festival resumes. For details of the remaining programs, see the sidebar.