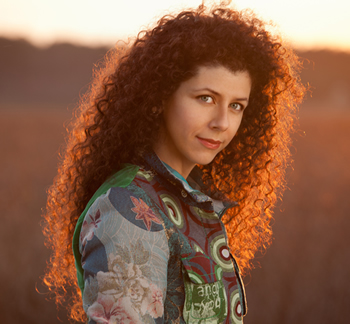 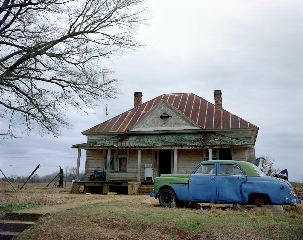 This preview has been provided by Kathryn Findlen.

"Findlen exudes confidence and grace.  Her movements and expressions are private and sensual and I often felt as though we were peeking in on something we shouldn't be watching.  " -The Austin Post Review of Kenneth Frazelle’s "Songs in the Rearview Mirror"

Songs in the Rear View Mirror by composer Kenneth Frazelle is  "...one of the finest American song cycles in recent or distant memory…" (San Francisco Classical Voice). Part road trip and part childhood reminiscence, listeners are transported on an evocative and haunting musical portrait of Southern life and art, past abandoned barns, tangles of kudzu and evangelizing road signs. The work grew out of a fascination with the artistic progeny of humble Hale County, Alabama through the celebrated photographs, sculpture and paintings of Alabama native William Christenberry. When Frazelle undertook his own journey in the artists’ footsteps he not only found new sources of inspiration but unexpectedly unearthed many poignant, nostalgic and often turbulent memories from his own Southern childhood. Songs in the Rear View Mirror is one of Kenneth Frazelle’s most ambitious works, comprised of ten songs united by refreshing harmonies, coloristic piano writing, and the undulating rhythm of the highway.

Songs in the Rear View Mirror was underwritten by a gift from Linda and Stuart Nelson.

Biographies of Composer and Performers

Kenneth Frazelle is a composer whose music, according to The San Francisco Examiner, "came straight from — and went straight to — the heart..." Frazelle’s distinctive voice blends structural and tonal sophistication with a lyrical clarity; he has been influenced not only by his study with the great modernist Roger Sessions, but also by the folk songs and fiddle tunes of his native North Carolina. Some of his important works include the Sonata-Fantasy for solo piano, Concerto for Chamber Orchestra, Blue Ridge Mountain Airs II for flute and piano, and Songs in the Rearview Mirror. His music has been performed by Jeffrey Kahane, Yo-Yo Ma, Anthony Dean Griffey, Warren Jones, Paul Robison, the Los Angeles Chamber Orchestra and many others. He has won the Barlow Prize, the Goddard Lieberson Fellowship, and the American Academy in Rome's Regional Visiting Artist Fellowship. He is currently on faculty at the North Carolina School for the Arts.

Richard Masters is a pianist, chamber musician and vocal coach based in Austin, TX. His repertoire includes many new works by contemporary composers; a strong proponent of new music, he is constantly commissioning new works from local composers for inclusion in his solo recitals. Shortly before the composer's untimely death, Daniel Catán asked him to write the piano/vocal reduction for his opera La hija de Rappaccini: the score is available from G. Schirmer as a rental. Recent performances include the world premiere of Daron Hagen's operatic trilogy "New York Stories" (music director), Christopher Ozley's "Postcard Pieces," Dan Welcher's "Hi-Tech Etudes," and songs/operas by Jake Heggie, Viktor Ullmann, Aaron Copland and many others. He holds degrees from the University of Colorado, the Juilliard School, and the Eastman School of Music. www.richard-masters.com

UNCSA alum, Mezzo Soprano Kathryn Findlen, “has a rich, lush vocal quality and an incredible stage presence” (Austin Post) which have gained her a nomination for Best Classical Vocalist of the Year in Austin by the Austin Critics Table Awards. She has made solo appearances with Austin Lyric Opera, the Gilbert and Sullivan Society of Austin, Austin Symphony Orchestra, Texas Choral Consort, Austin Civic Chorus, and been presented in concert at Texas State University, the University of Texas at Austin, Southwestern, and Texas Lutheran University. As a recitalist Kathryn Findlen’s collaborations place her at the forefront of new American concert repertoire. She has worked with Pulitzer Prize winning composers John Harbison, John Corigliano, and Robert Ward bringing their compositions to life on the concert stage, and most recently Pulitzer Prize winner George Crumb, preparing his new piece for voice and piano “Sun and Shadow.” Upcoming this season are performances with harpist Delaine Fedson on the Jessen Distinguished Artist Series at the University of Texas at Austin, and the mezzo solos for Austin Symphony Orchestra’s Verdi Requiem in November. kathrynfindlen.com