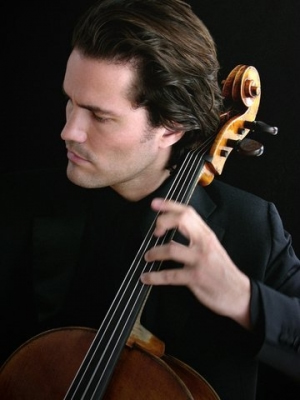 Music Director Grant Llewellyn will lead the North Carolina Symphony in a 2012-2013 classical season orchestra highlight of Sibelius’ Symphony No. 2, along with works by Benjamin Britten and Robert Ward, at performances in Chapel Hill and Raleigh, Feb. 7-9, 2013.

The performances will take place on Thursday, Feb. 7, at 8 p.m., at Memorial Hall on the campus of the University of North Carolina at Chapel Hill; and Friday and Saturday, Feb. 8-9 at 8 p.m. in downtown Raleigh’s Meymandi Concert Hall at the Progress Energy Center for the Performing Arts.

Bailey’s rare combination of compelling artistry, technical finesse, and engaging personality has secured his place as one of the most sought-after cellists today. Praised by Gramophone Magazine for his “virtuoso technique, strong, richly expressive tone and bold, individual manner of playing,” Bailey performs on a 1693 Matteo Gofriller Cello, formerly owned by Mischa Schneider of the Budapest String Quartet. In addition to his extensive touring engagements, he is the Artistic Director of El Paso Pro Musica, Artistic Director designate of the Sitka Summer Music Festival and Series (Alaska), and Professor of Cello at the University of Texas at El Paso.

In addition to stellar performances, North Carolina Symphony concertgoers can enjoy pre-concert talks and “Meet the Artists,” which feature interactive conversations with guest artists and select orchestra members, at many Symphony events. For the Chapel Hill performance, Dr. Letitia Glozer of UNC will host a pre-concert talk in Gerrard Hall at 7 p.m. For the Raleigh performances, Jonathan Kramer of N.C. State University will lead a pre-concert talk at 7 p.m. in Swalin Lobby on Friday, Feb. 8, and there will be a “Meet the Artists” opportunity in Swalin Lobby, hosted by Catherine Brand of WUNC-FM at 6:30 p.m. on Saturday, Feb. 9.  There will be “Ask A Musician” opportunities in the lobbies at intermission both evenings in Raleigh.

Meymandi Concert Hall is located in the Progress Energy Center for the Performing Arts, 2 E. South St., in Raleigh.  Memorial Hall is located at 114 East Cameron Ave., on the campus of the University of North Carolina at Chapel Hill.

This concert is made possible in part by The Arthur and Campbell Moss Solo Artist Fund.