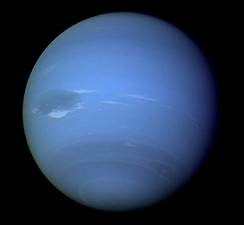 Conductor William Henry Curry took the North Carolina Symphony and women’s voices of the North Carolina Master Chorale on a guided tour of the solar system and beyond, in a program featuring music from television and film science-fiction icons and an aural and visual feast of Gustav Holst’s equally-iconic The Planets.

The program began with music by Richard Strauss and Johann Strauss, Jr. used in Stanley Kubrick’s film 2001: A Space Odyssey. First was the Fanfare from R. Strauss’ Also sprach  Zarathustra, Op. 30 (1896), played convincingly and forcefully but marred by the unmusical tone of the electronic organ which began and ended the work. It is past time for Meymandi Concert Hall to have a real pipe organ adding distinguished sounds to those of the North Carolina Symphony. The orchestra’s string sections made the most of J. Strauss, Jr.’s "On the Beautiful Blue Danube" waltz, Op. 314 (1867).

Interstellar space was the subject of music from the Star Wars and Star Trek motion pictures. Introducing John Williams’ music for the Death Star battle scene in The Empire Strikes Back, Maestro Curry humorously described it as “the scene where Luke Skywalker finally defeats the Klingons,” then said quickly, “Wrong movie!” When the Jupiter movement of The Planets was played after intermission, we heard the source of some of Williams’ musical language. In the Star Wars excerpt and in Calvin Custer’s arrangement of thematic music from the various incarnations of the Star Trek series, the Symphony’s brass and percussion sections starred.

The program’s second half consisted of a single work, arguably the best-known of Gustav Holst’s compositions: The Planets, Op. 32 (1914-1917). A ‘jumbotron’ screen was suspended over the orchestra so that the audience could see magnificent high-definition images of each planet, from NASA’s unmanned expeditions. Simply put, the orchestra’s performance was stellar. Curry knows this score intimately, and brought out all of its colorful musical portraits of the deities whose names the planets bear. Particularly memorable was the contrast between the first two movements: the raging of “Mars, the Bringer of War,” with its driving 5/4 rhythm, and the serenity of “Venus, the Bringer of Peace,” with its two harps and celesta adding to its ethereal calm. The final movement, “Neptune, the Mystic,” faded away with the beautiful off-stage voices of the women of the N.C. Master Chorale, directed by Alfred E. Sturgis, who managed to keep his forces in sync with the orchestra despite the lack of a line-of-sight between himself and Curry.

Even though Holst’s music was not about the planets themselves, but rather about their namesakes, the addition of the NASA images brought a new dimension to this justly-famous work. Congratulations to the North Carolina Symphony for making this multimedia journey through space part of its 80th Anniversary celebrations.