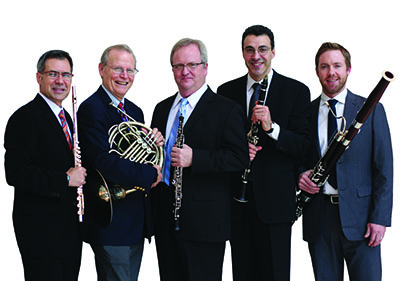 Chamber Music Wilmington presented the penultimate concert of its splendid 2012-13 season at UNCW’s Beckwith Recital Hall. Members of the evening’s ensemble, Ventus, are all on the faculty of the North Carolina School of the Arts, and all are substantial soloists as well. What was apparent in this concert is that each player, besides being masterful on his instrument, has the finest ear for rhythmic and coloristic interplay with the other musical lines.

Beckwith Recital Hall, with its resonant, responsive acoustics, was an excellent setting for this music of largely light and relatively delicate character. Wind quintet music is not typically a medium for searching expression, but all the pieces were appealing and enjoyable, the more so for the superb performances they received.

The seven-movement Milhaud work which opened the program, La Cheminée du Roi René (The Fireplace of King Rene) fluctuated between gently melodic music and more upbeat sections. The performance was notable for its clean phrasing and rhythm, and the fine melding of the instruments. The last movement, a nocturne, featured a beautiful soft tone in the middle.

The superb hornist David Jolley performed the next piece, "Villanelle" by Paul Dukas, with Barbara McKenzie accompanying. This is an appealing showpiece for the horn, which contrasted a bright opening with characteristic horn calls and sections of open virtuosity. Mr. Jolley drew rich melodic lines and a wonderful variety of color from his instrument. Ms. McKenzie contributed some attractive lush tone from the piano.

The Cinq pieces en trio by Jacques Ibert, resembled the Milhaud set in being short and by turns mildly animated and lyrical. The contrapuntal lines were brought out with excellent clarity; in the fourth movement the clarinet had an especially delicate, well-wrought counterline. The ending was sheer fun.

Debussy’s "Syrinx" opened the second half in most attractive fashion. First the flutist, Tadeu Coelho, narrated the story of the text wonderfully, with dramatic personality. Next he played the piece with Ms. McKenzie reading the poem (in English). Finally Mr. Coelho performed the piece as soloist. This approach gave the music more than the usual depth of presentation. His performance featured a rich tone and finely inflected phrasing, along with a passion in evoking the pastoral story. The ending fadeout was most beautiful.

The concluding work was also the most substantial: the Sextet for wind quintet and piano by Francis Poulenc. Part of this was due to the addition of the piano, which contributed a weight of sound not present in the wind ensemble. Its three movements were also the largest-scale music played on the program.

The first movement as a whole featured Poulenc’s characteristic cabaret-like sound alternating with almost sentimental melodic sections. The slow section saw sensitive give and take among the instrument and a fine mysterious sound. The winds created rich color even in pianissimo. The one reservation about the performance was that the tempo seemed slightly slow, the energy more restrained than blazing.

The second movement had a fine opening oboe solo. A peppy middle section led back to the lyrical music. The piano had some sensitive coloring here. The robust third movement, with its energetic interchange of the theme brought forth full tone from the ensemble along with some soaring melody and entertaining parody. The ending, unexpectedly lyrical, might have been bigger and broader – a small reservation. The audience responded with well-deserved appreciation.