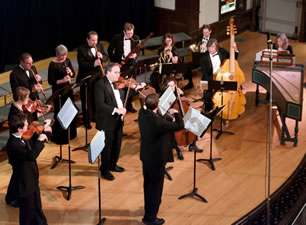 This preview has been provided by The NC H.I.P. (Historically Informed Performance) Music Festival.

The Mallarmé Chamber Players, in collaboration with four other organizations and two university music departments, are teaming up to present a week-long festival of music performed on period instruments. The newly organized festival, the North Carolina H.I.P. Music Festival (H.I.P. = historically informed performance), will run from January 27 through February 3, 2013, and will feature performances and workshops by Aliénor (Durham), Baroque and Beyond (Chapel Hill), Ensemble Vermillian (Davidson and Berkeley, CA), Mallarmé Chamber Players (Durham), the Vivaldi Project (Washington, DC) and the music departments of the University of North Carolina at Chapel Hill and Duke University. All events will take place at various venues in Chapel Hill and Durham.

To help support the festival,  Mallarmé has received a Challenge America Fast-Track grant from the National Endowment for the Arts, which offers support primarily to small and mid-sized organizations for projects that extend the reach of the arts to underserved populations -- those whose opportunities to experience the arts are limited by geography, ethnicity, economics or disability. Projects include commissions, residencies, rehearsals, workshops, performances, exhibitions, publications, festivals and training programs.  This year, the NEA has awarded 153 Challenge America Fast-Track grants totaling $1.53 million awarded to organizations in 41 states. Grants from the National Endowment for the Arts generate, on average, eight dollars from non-federal sources for each dollar awarded. Additional support of the festival has been made available by Lex and Kathy Silbiger of Durham.

WHAT IS THE PURPOSE AND HISTORY OF THE NORTH CAROLINA H.I.P. MUSIC FESTIVAL?

North Carolina is fortunate to be home to a wealth of talent of musicians who perform on period instruments. After several years of successful Historical Bach concerts, Mallarmé’s artistic director, Suzanne Rousso, starting talking to some of the musicians who performed in these concerts. The group, cellists Brent Wissick, Stephanie Vial and Barbara Krumdieck and harpsichordists Elaine Funaro and Beverly Biggs, hoped to develop a festival of music on period instruments with historically informed practices. With great enthusiasm the North Carolina H.I.P. Music Festival was born!

Mallarmé has taken the lead on this project, soliciting support and input from the other participating groups. Each ensemble is producing their own events independent of the others and taking on most of the associated expenses. However, we are collectively marketing and promoting the events as well as co-producing the educational activities.

OUR COLLECTIVE DESIRED OUTCOMES ARE THREE-FOLD:

Over the course of the week, five concerts, two workshops, a master class an, informance and in-school events will be presented. Some of these events are free and open to the public and some have a single ticket admission price. However, anyone may opt to purchase a HIPSTER pass for $50, which allows admission to all performances, the master class, as an auditor at the workshops and special invitation to a HIPSTER reception and open rehearsal. Additionally, the NEA grant will allow the festival to give presentations in several Durham and Chapel Hill schools and throughout the community, including a workshop at the Durham School for the Arts and a master class at UNC-CH with countertenor Michael Maniaci.

Twenty-three total musicians will be participating in activities including a concert by members of the UNC-CH faculty performing French baroque music “discovered” by Henri and Robert Casadesus in the early 20th century (in actuality, the works were written by them), a concert presented by Aliénor of contemporary and early harpsichord music and a performance by Ensemble Vermillian of German and Italian baroque music. The Vivaldi Project will present two performance workshops modeled on their successful Institute for Early Music on Modern Instruments held each summer in Washington, DC. The workshops are for modern string players interested in learning historically informed baroque playing techniques; one will be given for string teachers and another for professional players.

Countertenor Michael Maniaci will be featured as a guest artist on the January 27th Baroque and Beyond concert, the opening event of the festival. Ever since his 2007 Metropolitan Opera debut in Handel’s Giulio Cesare, Mr. Maniaci has been in high demand as one of the foremost countertenors in baroque opera. In addition to the concert performance, Mr. Maniaci will give a master class for vocal students at UNC-CH while he is in the area. Finally, the Mallarmé Chamber Players will present the closing concert of the festival with great German baroque string works including J.S. Bach’s Brandenburg Concerto No. 3 and the Telemann Concerto for recorder and viola da gamba featuring Ensemble Vermillian’s France Blaker on the recorder and UNC’s Brent Wissick on gamba.

Individual tickets for individual events will be available at the door; in addition, tickets for the February 3rd Mallarmé concert can be purchased in advance through their website www.mallarmemusic.org or by calling 919/560-2788. Those who are interested in obtaining a HIPSTER pass to all events including the Maniaci master class, workshops and reception may do so through the Mallarmé website or any of the individual ensembles’ websites. Registration and additional information for either of the workshops can be found online at hip.mallarmemusic.org.