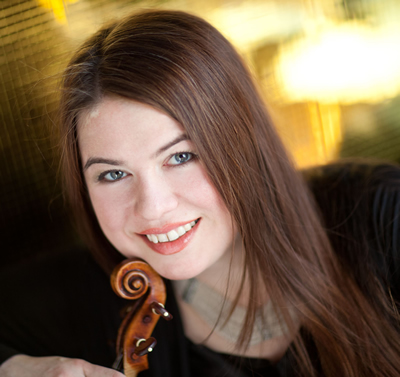 Music Director Grant Llewellyn will lead the North Carolina Symphony and violinist Lara St. John in a 2012-2013 classical season orchestra highlight of selections from the Antonio Vivaldi’s Four Seasons and Ástor Piazzolla’s The Four Seasons of Buenos Aires, along with works by Piotr Illyich Tchaikovsky, at performances in Chapel Hill, Raleigh, and New Bern, Jan. 10-13, 2013.

The performances will take place on Thursday, Jan. 10, at 8 p.m., at Memorial Hall on the campus of the University of North Carolina at Chapel Hill; Friday and Saturday, Jan. 11-12, at 8 p.m. in downtown Raleigh’s Meymandi Concert Hall at the Progress Energy Center for the Performing Arts, and Sunday, Jan. 13, at 7:30 p.m., at the New Bern Riverfront Center.

In addition to stellar performances, North Carolina Symphony concertgoers can enjoy pre-concert talks and “Meet the Artists,” which feature interactive conversations with guest artists and select orchestra members, at many Symphony events. For the Chapel Hill performance, Dr. Letitia Glozer of UNC will host a pre-concert talk in Gerrard Hall at 7 p.m. For the Raleigh performances, Dr. Tom Koch of N.C. State University will lead a pre-concert talk at 7 p.m. in Swalin Lobby on Jan. 11, and there will be a “Meet the Artists” opportunity in Swalin Lobby, hosted by Catherine Brand of WUNC-FM at 6:30 p.m. on Jan. 12.  There will be “Ask A Musician” opportunities in the lobbies at intermission both evenings in Raleigh.  For the New Bern performance a pre-concert talk by Philip Evancho of Craven Community College, will be given at 6:30 p.m. on the second floor of the Convention Center.  There will be “Ask A Musician” in the lobby during intermission.

Meymandi Concert Hall is located in the Progress Energy Center for the Performing Arts, 2 E. South St., in Raleigh.  Memorial Hall is located at 114 East Cameron Ave., on the campus of the University of North Carolina at Chapel Hill.  The New Bern Riverfront Convention Center is located at 203 South Front Street, in New Bern.

This concert is made possible in part by The Arthur and Campbell Moss Solo Artist Fund.

Founded in 1932 and subsequently made an entity of the North Carolina Department of Cultural Resources, the North Carolina Symphony employs 657 professional musicians under the artistic leadership of Music Director and Conductor Grant Llewellyn and Resident Conductor William Henry Curry. Every year, this orchestra performs over 175 concerts in more than 50 North Carolina counties, with some 60 of those concerts offered in the Raleigh-Durham-Chapel Hill metropolitan area.