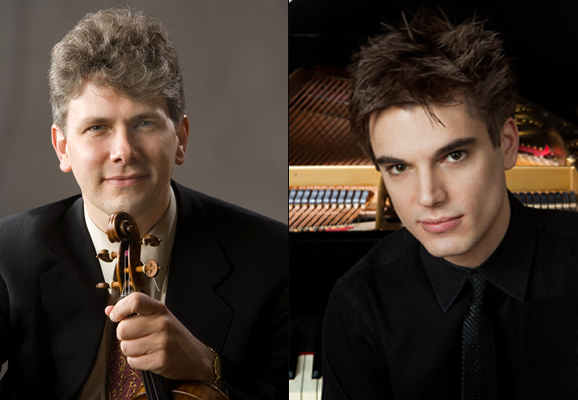 Even if you arrived very early at the duo-recital by violinist Nicholas Kitchen and pianist Andrew Tyson at St. Stephen’s Episcopal Church, you may have found it difficult to find a good seat, and by concert time (4:00 PM on a wintry afternoon) St. Stephen’s was entirely full. Kitchen and Tyson were raised in Durham, and certainly word was out that this was a must-hear (the publicity featured laudatory words from the CVNC review of last year’s installment in the series).

The first half of the all-Beethoven program included the Sonata No. 4 in A minor, Op. 23 and Sonata No. 6 in A, Op. 30/1. Both of these works, and indeed, eight of the ten sonatas for piano and violin, belong to the composer’s early period. This means that they are conceived as sonatas for piano and violin, that is, the piano is clearly the leading partner among the two instruments, and the violin the accompanying partner (and always described as such on the title pages of the nineteenth century). What does this mean in practical terms? For example, if one views the texture as essentially a continuation of the trio sonata, with two treble parts, and a continuo bass line, then it is the piano’s right hand that plays the part of the leading treble voice. Thus, in the opening of the Sonata no. 4, the thematic material is in the piano, and the violin plays insignificant accompanying material (two inaudible chords in the middle of the texture for the first four measures). This conception of the work, in combination with a piano the likes of which Beethoven could never have heard, even if he might have imagined it (a concert-size modern Steinway) meant that the piano (with lid up) was very loud, considerably over-balancing the violin, even with Kitchen standing well forward. I am not advocating that all performances of this literature be on period instruments, but it behooves performers to beware of the acoustic balance.

More generally, the performances were technically adept – extremely clean, the tempos well-chosen, the ensemble first-rate – and yet somehow I would say that the music itself failed to really lift off. An audience member nearby commented at the intermission that even listening had been exhausting. My interpretation: mastery was clearly present, but what was impressive was the labor, more than the expressive result. What could bring this performance to the next level? I can’t help thinking that more context is important (no program notes were offered, nor spoken thoughts about what is unique about these works), and perhaps an eye toward highlighting the musical particularities of these pieces, what makes them odd, unusual, and expressive.

No such caveats were necessary for the concluding work after intermission, the famous “Kreutzer” Sonata, Op. 47, for which the original edition notes that it is “written in a very concertante style, almost like that of a concerto” and “composed and dedicated to his friend R. Kreutzer, member of the Conservatory of Music in Paris.” This work has clearly made the transition to the Romantic, and to the composer’s middle style. In contrast to the works on the first half, here the violin is the leading voice, and opens the work with four measures of chords for the violin alone.

From the very beginning of the movement, and especially with the Presto, the music took flight, with Kitchen digging into the violin in a way that he had eschewed for the earlier works. The extended Andante with variation is based on a particularly Mozartean theme, and the performers were clearly reveling in putting the figuration of the variations across (e.g. Kitchen in the second variation, with a chromatic appoggiatura followed by repeated 32nds; really not so difficult, but here conveyed with the greatest virtuosity and expression). A minor criticism: the minore which followed could have been even more of a contrast – F minor is still an extreme key at this date, and the chromaticism signifies more of the same. (Not spooky enough!) The duo brought the movement to a lovely pianissimo close, and yes, the FF chord in A which opens the succeeding finale is supposed to be a contrast, but to my ears, the final harmonies of the Andante might have a few moments more to resonate….

At any rate the rollicking fugal presto brought the sonata and the afternoon to a lively close. The Kreutzer offered music-making that could be the pride of any concert stage in the nation, or in any metropolis internationally – truly world-class.