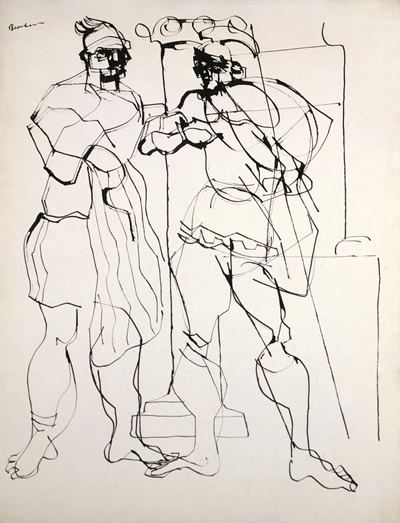 
Romare Bearden, Untitled from the Iliad Series, 1946, ink on paper. 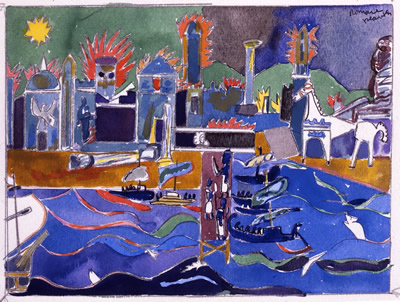 
Romare Bearden, The Fall of Troy, 1977, Watercolor and Graphite on Paper.

"Romare Bearden: A Black Odyssey" is the title given to the extraordinary travelling exhibition currently showing at the Reynolda House Museum of American Art in conjunction with the Smithsonian Institution Touring Exhibition Service (SITES). Bearden, a modernist, was born in Mecklenburg County in 1911 and moved as an infant to Harlem, although he returned often to his Carolina roots which he portrayed frequently in his vast and varied output.

The theme of the current exhibit, "A Black Odyssey," the wandering in search of home, is one that has echoed through the centuries, from the Jews in Egypt to more modern diasporas and displacements, from the slave trade to the emigration of Soviet Jews, from the Great Migration of blacks from the South to the migration of undocumented workers along the southern border of the U.S. Curated by Columbia University Professor Robert G. O'Meally, the four dozen works exhibited comprise three major segments related to Homer's Iliad and Odyssey.

In an alcove separated from the main gallery are nine large drawings (India ink on eggshell paper, apparently drawn with a bamboo pen) which depict scenes from the Iliad, all drawn in 1946, upon the artist's return from his enlistment in the U.S. Army. They depict the hell of war, and three are drawn with thick jagged lines, hinting at murder and violent death. These line drawings are the most abstract works in the show, devoid of shading or detail, bare and angry, evoking rather than depicting. Intriguingly, the artist adds a framing line, top, bottom or sides in addition to the mat and frame, a way of focusing attention but implying that there is more horror outside the frame, perhaps in the next drawing. A watercolor of equal size completes the Iliad section of the show

A splendid and colorful silk screen, "The Fall of Troy," painted in 1979, starts the Odyssey section of the show. Perhaps the most astonishing and intriguing thing about the next dozen and a half works (all painted in 1977) is that they are all collages, that quintessential art technique of the 20th Century. Braque and Picasso had both rocked the art world in 1912 with their incorporation of paper pictures glued (col = glue Fr.) onto their paintings. Bearden has dramatically juxtaposed bright Mediterranean blues with blood reds and black faces. Although Bearden is African-American, he was quite pale-skinned, often being mistaken for white; but his vision of the Odyssey is that of the black man, "…all of us, from the time we begin to think, are on an [o]dyssey."

I was particularly struck by the large collages of "Poseidon, The Sea God – Enemy of Odysseus" and "The Sea Nymph," with its sinuous curves and wavy forms which seem to contradict the nature of collage. A dramatic and ominous "Baptism" (silk screen from 1975) closes this portion of the show. Then follow 20 smaller watercolors, replicas of the collages painted one year after the original collages when Bearden was at his wife's birthplace, the Caribbean island of St. Maartens. It is interesting to compare the collage with its watercolor replica; the contrast of the collage is more pronounced than the watercolor although the artist outlined in graphite as he might have cut with a scissors.

The entire experience can be relived at home, or vicariously or "virtually" in the excellent materials available on-line - see http://www.sites.si.edu/romarebearden/ - as well as a free 15-minute video narrated by the curator, O'Meally. The exhibit will be open until January 13, after which it will travel to Memphis in February and Ft. Worth in May, for details of which, click here.