At the CAM: "Girl Talk" and Angel Otero

Lisa Anne Auerbach, I Used to be Part of the Solution...Now I’m Part of the Problem, 2009, Courtesy of the artist and Gavlak Gallery, Palm Beach, FL. 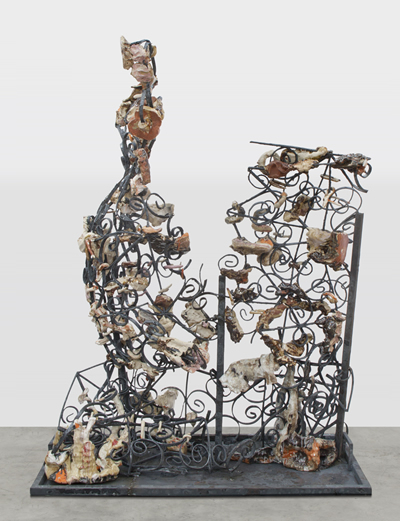 As you enter the large main gallery of the Contemporary Art Museum in downtown Raleigh, the show, "Girl Talk: Women and Text," may seem rather sparse, but google them and you find that some of the nine women neo-conceptualists have enormous stature. Jenny Holzer, for example, is represented by three small bronze plaques with some of her so-called "truisms": "Protect Me from What I Want" reads one. But elsewhere – in Times Square, in London, around the Guggengeim Museum – her often inflammatory, always exciting statements may blare from signboards and buildings and spill into the streets.

Spread across an entire gallery wall, Kay Rosen's work is a large placard carrying letters of the alphabet from A to I to remind us of her concern with language. As though speaking out of the installation, the final letters, HI, are differently colored. Marylin Minter's video "I'm Not Much But I'm All I Think About" obviously mocks the overly self-conscious artist: with a slow-motion camera she has two block letters M and E turning and falling and splashing into a soup of metallic pigment, reappearing to fall again.

The "girl talk" on six knit sweaters by Lisa Anne Auerbach is beautifully designed and must be examined front and back. On the front of one, she has stitched a row of bicycles and the statement "I used to be part of the solution"; on the back, a row of cars and trucks appears below "Now I'm part of the problem." Whatever their propaganda value, however, these garments seem eminently wearable.

But the best work at CAM is to be found in its ground level emerging artists gallery, with new work by Angel Otero, a fact already noted by the journal Artforum in its "critics' pick" series for November, and there is little I can add. Otero pours layers of oil paint on glass or plexiglass, scrapes them off before they harden, then places layer on layer of "skins" on canvas, where they ripple and wrinkle, forming vari-colored areas partly controlled by Otero, partly by the paint as it hardens, all of it stunningly beautiful. Another set of pieces by Otero also depends on accidentals: curved steel patio frames studded with bits of colored porcelain emerge from a hot kiln looking otherworldly. Obviously the old image of the artist, brush in hand, paints at the ready, has itself become otherworldly.

Otero will be up through February 4, "Girl Talk" through January 14. See our sidebar for details.