An Evening of Concertos by Antonio Vivaldi 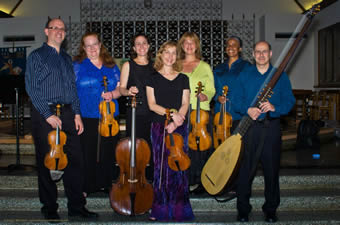 Chamber Music Wilmington continued its season at St. Paul’s church, with a concert devoted entirely to music of Antonio Vivaldi. It was an evening of high-quality music making by The Vivaldi Project, whose members are much in demand in the early-music world and in fact perform a good deal of music besides Vivaldi.

The string instruments used strings made of gut, as in Vivaldi’s time – as opposed to the steel strings now standard. This gives a different tone and character to the sound. The continuo section had a strong presence, being as much as half or more of the ensemble, which varied between a total of seven and eight. The stage picture, and the sound, were enhanced by the presence of an instrument probably unfamiliar to many modern audiences: the theorbo. This is a long-necked bass lute from the Renaissance whose strings stretch well beyond the working length of the player’s arm. It added a deep and wonderfully lush resonance to the continuo.

The program began with the Concerto for 2 Violins and Cello in D minor, Op. 3/11, RV 565. This piece set the tone for the program. The playing had a rhythmic dynamism and lovingly shaped phrasing. Each player performed with apparent passion. What stood out in the phrasing was the beautiful tapering of the lines and at times the nuances of swelling within phrases. Soft sections had a particularly clear, attractive sound. The spiccato sections offered attractive timbral contrast.

The following Concerto for Violin in D minor, Op. 8/7, RV 242, featured energetically phrased solos by Elizabeth Fullard. It illustrates Vivaldi’s remarkably prolific output, being the seventh full concerto in an opus which also includes the famous Four Seasons. It is subtitled Il piacere, and as the name suggests, offered the soloist improvisatory-style sections along with the notated virtuosity.

The third work, Concerto Ripieno in A Major, RV 158, was a concerto without soloists, a type extensively cultivated by Vivaldi. This attractive piece had an especially mellow, reflective second movement.

A standout piece followed. This was the Concerto for Viola D’amore in D minor, RV 394. Allison Edberg played the solo on the viola d’amore with sensitivity and beauty of tone, more than compensating for the somewhat restricted dynamic range of the instrument. Her sound in the largo was lustrous. An especially attractive feature of the piece was the passages in which the soloist was accompanied by a single instrument winding around it with its own independent line. Her cadenza, rather than brilliance, brought a meditative quality.

The following Concerto for Violoncello in G major, RV 413, featured the excellent Stephanie Vial as cello soloist. There was a good deal of virtuosic, energized writing here, and Ms. Vial played it with flair. A nice feature of the first movement was the shifting rhythmic patterns, something often lacking in Vivaldi. This movement also had passages with the soloist accompanied by a single violin, which was a lovely sound. The soloist’s soft phrases were projected beautifully. This was the case in the second movement as well, which had the cello playing with just the continuo, and gave the soloist a showcase for expressive phrasing. The upbeat third movement, like the second, had unisons at the start, here lively as opposed to thoughtful.

The Concerto in C minor for Strings and continuo, RV 118, another ripieno concerto, closed the program with plenty of dynamic rhythms and sequences, as well as a nearly virtuoso passage for the continuo in the last movement.

Every member of this fine chamber-sized ensemble seemed to play with passion. Performing on original instruments contributes substantial beauties and the players are clearly masters of this challenging art. It might be added that the informative and relatively extensive program notes were, like the playing itself, in a passionate style which effectively advocated for the variety and excitement of the music. If the listener did not come away with the sense of uniqueness in each piece which the written descriptions intended to impart, the energy and expression of the performances brought forth a great deal. The audience in the nearly-filled church, attentive throughout, responded with heartfelt appreciation.