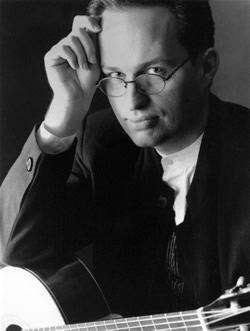 One of the pitfalls of the critical profession is the temptation either to become too negative or too positive in evaluating musical performances. If the critic cries wolf, in either direction, the reader will no longer be able to take what they read with open ears. It is thus with a little trepidation that I write that the recital by Bosnian guitarist (now based in Chicago) Denis Azabagic was certainly the finest guitar recital that I have heard in a lifetime of concert-going, and one of the best concerts of any kind I have heard since writing for CVNC.

If you have not yet been to one of the concerts presented by Music for a Great Space at Christ United Methodist Church on Holden Avenue in Greensboro, you should know that the sanctuary there was the fruit of the growth of the 1960s, and was built on an exceptionally large scale, both high, and long, with a relatively simple interior; a very modern building, and one that has quite resonant acoustics, as well as being visually impressive. The sanctuary was completed in 1970, and is adorned with an organ by Fisk added a decade later. All this to say that there is no exaggeration in the title of the series. The pews were relatively full for the recital, but nevertheless the notes of the five preludes by Villa-Lobos with which Azabagic opened the program were perfectly clear, and all the detail registered eight rows back.

From the outset it was obvious that Azabagic is gifted with a level of technical mastery that is rarely heard on the guitar, with every note precisely articulated. Not only does Azabagic make expressive use of a broad range of dynamics, from fortissimo to visible, but not audible, but the gamut of tone color with which he shapes the music is impressive. Most importantly, all these technical chops (which would put him in the crème de la crème already) are in the service of a keen musical intelligence with taste and soul. The Villa-Lobos preludes (from 1940) are precisely at the meeting place of classical music, contemporary music, the art of the performer, and the seductive appeal of the popular music of Latin America, and more specifically, Brazil. They are part of the fundamental repertoire of the classical guitar, and they were beautifully rendered. The lyricism of no. 3 was stunning in its melancholy, and the harmonics in no. 4 were to take the breath away.

It is particularly to Azabagic’s credit that the rest of the program, featuring works that only guitar nerds could possibly have heard of (try these names on your local music professor or music librarian if you don’t believe me) held the audience enthralled. Not that the music or the performance were not first-rate – they were – but to hold the attention of a general audience with four compositional voices completely new to them is no easy task. Completing the first half were the six Café Pieces by Vojislav Ivanovic (b. 1959, Sarajevo), comprising a “Tear Prelude,” “Funny Valse,” “Tango Café,” “Nostalgia,” “Lullaby (for Srdjan),” and “Improvisation and Dance.” The “Funny Valse” actually elicited laughs at its conclusion, the “Tango Café” made use of Piazzolla’s compositional tics while retaining its own voice, and “Nostalgia” with tremolo melody was almost tragic in its retrospection.

After intermission there was another work by a composer of the former Yugoslavia, Dusan Bogdanovic (b. 1955, Belgrade), Blues and 7 Variations, clearly a blues (audible in its structure) but in a very modern idiom. B.B. King would scarcely recognize it.

Perhaps the most directly appealing work on the program came next, a set of five character pieces titled Suite Out of Africa, by American composer Alan Thomas (b. 1967) – “Call at Sunrise,” “Morning Dance,” “Zenith,” “Evening Dance Master,” “Cradle Song.” The opening "Call" makes use of very diatonic/folkish harmonies with plagal emphases recalling recent American pop; the "Dance" is more jazzy with irregular meters; "Zenith" goes farther afield, with the guitar detuned so that it recalled, in the monophonic writing, the idiom of the oud and North Africa. The “Cradle Song” boasts an exceptional subtle conclusion – the melody comes to its end, the accompanying figure continues to repeat, until it is so quiet that it can no longer be heard. Beautifully and movingly done.

The program concluded with set of Folk Song Variations by Bulgarian Atanas Ourkouzounov (b. 1970) – think of the idiom of the “Mystery of Bulgarian Voices”, but transferred to the guitar. Azabagic was rewarded with a standing ovation, and he granted an encore by Barrios Mangoré – the “Ultimo Tremolo”.  It was a memorable evening.