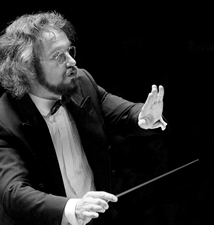 Conductor Carlos Kalmar will lead the North Carolina Symphony in a 2012-2013 classical season orchestra highlight of Dmitri Shostakovich’s Symphony No. 7, “Leningrad.”  The performances take place on Friday, Nov. 16, and Saturday, Nov. 17, at 8:00 p.m. in downtown Raleigh’s Meymandi Concert Hall at the Progress Energy Center for the Performing Arts, and on Sunday, Nov. 18, at 8:00 p.m. in Memorial Hall on the campus of the University of North Carolina at Chapel Hill.  The program in Raleigh and Chapel Hill also includes Mozart’s Symphony No. 25, “Little G minor.”

During a world at war in a city under siege, Shostakovich lifted a nation and the world through music during World War II.  Composers, like all other Soviet citizens, had to navigate through the shifting and arbitrary rules of the state in order to survive.  The weekend concerts are the culmination of a larger exploration of music and politics in Stalin’s Russia, that have ranged from lectures to chamber music performances, to a podcast interview between host David Hartman and conductor Carlos Kalmar, which will be posted at www.ncsymphony.org on Friday, Nov. 16.

Conductor Kalmar brings to the podium a wide breadth of musical expertise. He recently assumed the position of Chief Conductor and Artistic Director of the RTVE Symphony Orchestra & Chorus in Madrid. He enters his ninth year as Music Director of the Oregon Symphony Orchestra where he has dramatically raised the musical standard, as witnessed by New York audiences in May 2011 when the orchestra made their highly acclaimed Carnegie Hall debut. He also continues as Artistic Director of Chicago’s Grant Park Music Festival.

Tickets to the Raleigh Classical Series performance of Shostakovich’s Symphony No. 7, “Leningrad,” on Friday, Nov. 16, and Saturday, Nov. 17, and the Chapel Hill performance on Sunday, Nov. 18, range from $18 to $50.  Student tickets are $10 in both locations.

Founded in 1932 and subsequently made an entity of the North Carolina Department of Cultural Resources, the North Carolina Symphony employs 67 professional musicians under the artistic leadership of Music Director and Conductor Grant Llewellyn and Resident Conductor William Henry Curry. Every year, this orchestra performs over 175 concerts in more than 50 North Carolina counties, with some 60 of those concerts offered in the Raleigh-Durham-Chapel Hill metropolitan area.