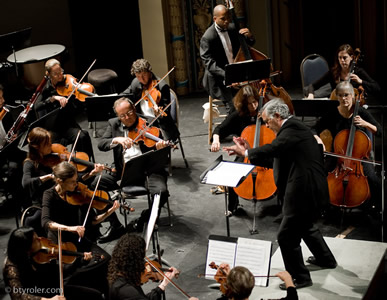 The Chamber Orchestra of the Triangle under the baton of Lorenzo Muti delighted the audience at Hayti Heritage Center with "Musical Fairytales." Well, the pieces on the program were not all fairytales. They all were not all actually written for children, but they all were of that simple and direct charm that characterizes fairytales and folk music and they were all composed by late romantic era French composers.

Opening the parade of pleasures was Maurice Ravel’s Ma Mere L’oye Suite (Mother Goose Suite). Originally composed as a piano duet for Mimi and Jean Godebski, the children of family friends, the piece was transcribed for solo piano by Ravel's friend Jacques Charlot the same year it was published (1910). The five movements of the piece are titled “Pavane of Sleeping Beauty,” “Little Tom Thumb / Hop o' My Thumb,” “Little Ugly Girl, Empress of the Pagodas,” “Conversation of Beauty and the Beast,” and “The Fairy Garden,” In 1911, Ravel orchestrated the work. Then, in 1912, he expanded it into a ballet, adding new movements and interludes. Muti and the musicians of the COT are masters of the French repertoire of this period and set a high standard for the rest of the concert in their reading of this exquisite masterpiece.

Songs of the Auvergne are settings for orchestra and soprano voice of French folk songs from the Auvergne region composed by Joseph Canteloube between 1923 and 1930. The songs are in the local language, Occitan, and are grouped in five series of 5 to 8 songs each. Eight of the most delicious and spicy of the songs were sung by the nationally and internationally acclaimed and locally loved Louise Toppin. Each song is supported by Canteloube’s lush orchestrations with rich strings, brass and percussion (including piano) underpinning and woodwind filigrees like nymphs in the meadow. Some of the highlights were “The Forsaken Girl,” about a girl whose lover fails to appear as promised so she ends up singing to a star. It was the epitome of forlorn love. The most popular and widely heard of the songs, the beautifully evocative “Baïlèro” is basically a love call from one lover to another. “Chut, chut” (hush, hush) is a lullaby sung with calming sweetness. The closing selection was the saucy and delightful “Unhappy is he who has a wife.” Toppin took each of the songs, whether playful and jaunty, or wistful and romantic, and with her velvety voice made the most of them with the excellent rich accompaniment of the orchestra.

Dolly Suite, Op. 56 by Gabriel Fauré, is a collection of pieces for piano four-hands written or revised between 1893 and 1896, to mark the birthdays and other events in the life of the daughter of the composer's mistress, the singer Emma Bardac. The titles of the short pieces are “Berceuse,” for Dolly’s first birthday, “Mi-a-ou,” not a cat’s meow, but Dolly’s attempt to say her older brothers name - Raoul, “Le jardin de Dolly,” Dolly’s garden was a New Year's gift, 1895, “Kitty-valse,” the Bardacs' pet dog was called Ketty, “Tendresse,” 1896 and “Le pas espagnol,” a Spanish dance. The orchestral version of the suite was completed by Henri Rabaud in 1906. The best-known section of the suite, “Berceuse,” has been arranged for several different combinations of instruments. The music was tender and lilting and played with superb sensitivity by this very accomplished orchestra.

The COT demonstrated their musical mastery of phrasing and interpretation in a delightful and elegant performance of this charming music.

The closing treat of the concert was a stirring performance of the great and beautiful anthem "Lift Every Voice and Sing." Embarking on its third year, KidZNotes  is a program for elementary school students modeled after El Sistema, which puts classical musical instruments in the hands of students regardless of socio-economic background. The Beethoven Ensemble is the advanced level of the program and includes 41 students, grades 1-5 who have earned this level of performance skill. They played today alongside members of the Chamber Orchestra of the Triangle and it was a thrilling performance arousing thunderous applause from the audience.

The concert repeats on Monday at 7:00 PM at the Haiti Heritage Center in Durham.