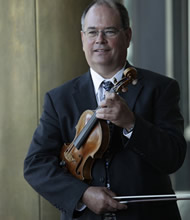 The North Carolina Symphony was under the baton of guest conductor Carlos Miguel Prieto, considered one of the most dynamic young conductors in recent years. He has conducted orchestras in the U.S., in Mexico (his native country) and in Europe, Russia, Israel and Latin America. He is a champion of contemporary music and is much admired for his commitment to youth and education.

The program began with Samuel Barber's Symphony No. 1, Op. 9, which was completed and premiered in Rome in 1936 when he was 26 and just beginning to become widely recognized as a composer of great talent and promise. It is a one movement piece modeled after Sibelius' Seventh Symphony and is dedicated to his long-time companion, Gian Carlo Menotti. Like Sibelius' work, it is a compacted treatment of the four-movement classical symphony. The movements are played without pause and thematic material is developed through-out.

Barber made some revisions to the work in 1942–43. The revised version was first performed in 1944 by the Philadelphia Orchestra conducted by Bruno Walter and it is this version that is commonly heard today. The symphony is very dramatic in nature, but has no programmatic intent assigned to it. Somehow this work has escaped my attention until this performance. It struck me that it sounded almost like a concerto for orchestra; intricate show-piece passages for all families of instruments and a variety of combinations as well as some outstanding solo work.

Prieto seemed perfectly at home with the piece and led a dazzling performance.

Dmitri Borisovich Kabalevski (1904-87) was a Russian composer best known for the "Comedians' Galop" from The Comedians Suite, Op. 26, and perhaps the Overture to his opera, Colas Breugnon. He was not as adventurous as his contemporaries in terms of harmony and style, sticking mostly to diatonic music with straight-forward melody. One area of significant contribution to the field of classical music was his consistent efforts to connect children to music. Not only did he write music specifically directed at bridging the gap between children's technical skills and adult aesthetics, but during his lifetime he set up a pilot program of music education in twenty-five Soviet schools.

His Violin Concerto in C, Op. 48 (1948), was one of those pieces written expressly for children and it was premiered by an 18-year-old virtuoso. Even though it is aimed at youth with cheery, energetic, rhythmical and catchy lyricism it is not exactly a simple or condescending work either. This is evidenced by the fact that immediately after it was premiered, the eminent violinist David Oistrakh, felt it an attractive enough piece to deserve professional-level performance and took the job upon himself.

The Violin Concerto is in three relatively brief movements. The opening Allegro molto e con brio had snappy rhythms and no cadenza. The Andante cantabile middle movement is in three clear sections. When the first theme returns at the end, the soloist abandons the theme to the orchestra and takes up a flowing obbligato instead. Space is found in the rambunctious Vivace giocoso last movement for a short, transparent cadenza.

The soloist for this concert was Brian Reagin, in his twenty-fourth year as concertmaster of the North Carolina Symphony. He has appeared frequently as soloist with the symphony to always great acclaim. His performance was characterized by jaw-dropping technical skill as well as tender lyricism and playful and lively bowing.

After having wrestled with a first symphony for some fifteen years, always conscious of the footsteps of Beethoven behind him, Brahms finally published his epic Symphony No 1 in C minor, Op. 68, in 1876. His Symphony No. 2 in D major, Op. 73, was premiered in Vienna just a little over a year later. It is a more relaxed work, somewhat lighter than the first though there are some dark moments, especially in the second movement. It is, as the First, a model of symphonic development that moves music forward solidly into the romantic era.

Following an introductory passage, the first main sweet (dolce) melody is introduced by the violins and after it is developed, a second melody, one of Brahms' most gorgeous, is introduced by the cellos in a highlight of the symphony for this reviewer. While not as dramatic as the opening movement of the first symphony, there is drama, interspersed with pastoral charm. The movement ends with a coda that features a haunting French horn solo.

The second movement adagio is little more brooding than the first and uses a variation form of development. The third movement contains very light articulated sections, which are possibly due to the influence of Mozart or Schubert. This lighter element provides a contrast to the previous two movements. It is ideal Brahms charm and was played superbly especially by the horns, and woodwinds.

The fourth movement begins with busy-sounding (but quiet) strings and develops in lively sonata form. Towards the end of the symphony, descending chords and a maze-like run of notes by various instruments leads to a repeat of the second theme which gives way to a blaze of brass as the symphony ends in a gloriously triumphant mood.

The pleasure of hearing a first-rate professional orchestra like the North Carolina Symphony is in hearing the subtle meaning in the composer's intent; precision of intonation and articulation, meaningful swells and diminuendos, purposeful phrasing and the grand scope of development to specify just a few elements. Prieto and the musicians of the orchestra worked well together to accomplish this, and it was a glorious thing to experience.

This program will be repeated on October 20. For details, see the sidebar.