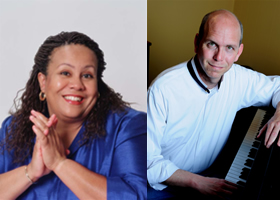 Did you know that such eminences as Schubert, Schumann and Wolf were not the only composers of fine art songs? Your music world would have been enlarged had you attended an evening of lesser-known art gems in the Nelson Music Room on the Duke University campus. The artistry of soprano Louise Toppin has been rightly and extensively praised in these pages over the years. Now Head of Voice in the Department of Music at UNC-Chapel Hill, she has garnered a host of awards and commendations worldwide.

On this evening she deserved great praise for championing the art songs of no fewer than ten composers, African-Americans and members of the group she identifies as the African Diaspora. Pianist David Heid (along with cellist Fred Raimi later in the program) performed as an equal colleague, complementing the evening in a powerful manner.

H. T. Burleigh (1866-1949) was probably the best known of the composers. This student of Dvorák contributed the first five numbers, including two selections from his cycle Saracen Songs. The song “He Met Her in the Meadow” had the trappings of a tender romance until it was ultimately revealed that the “her” referred to a Jersey cow.

William Grant Still’s (1895-1978) “Parted” from his Songs of Separation could scarcely have been more poignant in its combination of grief and forlorn hope. "Hold Fast to Dreams" by Florence Price (1888-1953) allowed singer and accompanist alike to make full use of its dramatic thrust: "Hold fast to dreams, For when dreams go, Life is like a barren field Frozen with snow." The plaintive mood was maintained with a song by Leslie Adams (b. 1933), "Sence You Went Away," which used a James Weldon Johnson poem in dialect with potent appeal, an appeal that can be demonstrated by one of the four verses: "Oh, ev'ything is wrong, / De day's jes twice as long, / De bird's forgot his song / Sence you went away." Rounding out this set were songs of similar merit by TJ Anderson (b. 1928), this one written for Louise Toppin, and by Richard Thompson (b. 1954).

“Eriri Ngeringe” (The Thin Thread) and “Ite Etipia-etipia” (The Unbreakable Pot) came from Six Igbo Songs by the Nigerian composer Joshua Uzoigwe (1946-2005). A short biography in dramatic form characterized “I Am Harriet Tubman” by Nkeiru Okoye (b. 1972), a powerful statement premiered by Toppin in 2006. Robert Owens (b. 1925) has utilized several Langston Hughes poems, among which were: “Heart” (I offer my heart; no one cares at all.) and “Girl” (exploring the delicate balance between life and death.)

The aforementioned cellist Fred Raimi joined in for what was arguably the most intriguing set of the evening. The four sections of Song of the Seasons by Valerie Capers (b. 1937) constituted chamber music of the finest order, quite reminiscent of a great piano trio in which the voice assumes the role of the violin. The composer also supplied the text depicting the seasons of the year. Excerpts from the excellent program notes give a useful sample of the work: For the “Spring” movement, interplay among “the cello, voice and piano describes the awakening of nature and the promise of hope…” “Summer” portrays “ the laziness of a warm summer day as the singer reflects on a new love.” The “Autumn” and “Winter” movements brought comparable attractiveness.

Next time you see Louise Toppin (or David Heid, or Fred Raimi), please offer a word of thanks for so ably promoting works of art that deserve their place in the front rank of this world’s elite.

Note: This program will be repeated 9/25 on the Smedes Parlor series at St. Mary's School in Raleigh. For details, see the sidebar.