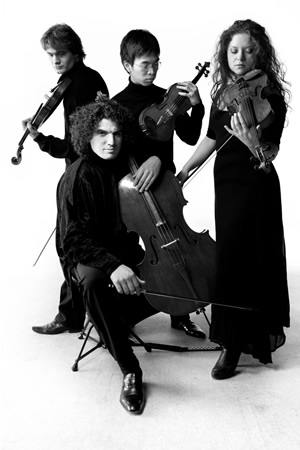 A most appreciative crowd at this performance in the Cary Cross Currents Chamber Music and Arts Festival found much to appreciate in this performance by the Lipkind Quartet. Comprised of violinists Artiom Shishkov and Yusuke Hayashi, violist Nora Romanoff-Schwarzberg and cellist Gavriel Lipkind, the ensemble performed signature quartets by Haydn, Beethoven and Shostakovich. These are pieces that are unmistakably by these composers and contain elements of compositional style for which they are widely recognized.

The program opened with a playful and charming rendition of Haydn’s Op. 64, No. 5. The lovely melody played by the first violin soaring over the accompanying staccato chords of the other instruments at the very beginning of the piece gives the piece its moniker of “The Lark.” The double recapitulation at the end of the first movement is one of Haydn’s unique innovations. The second movement is a simple, yet eloquent adagio performed expansively by the four musicians as they settled in to their resonant and precise ensemble. The melodic conversation was warm and rewarding. The third movement Menuetto came across as a lively country dance brought into the palace for Prince Esterhazy’s pleasure. It is interrupted with a chromatic trio before exerting its charm once more. The closing vivace is a wild and wooly chase, at times in fugal passages, that seemed like wind whipping in gusts, then it ends in a wisp, just drifting away. Haydn's capacity to explore and reinvent thematic material is on vibrant display in this masterwork. The Lipkind Quartet took full advantage of the playful charm and intimate beauty of one of Haydn’s great signature quartets.

The signature quartet chosen to represent Ludwig Van Beethoven was his Op. 18 No. 4 in C minor. When Haydn was writing his last string quartets, published in 1799, Beethoven was writing his first. This group of six was published as Op. 18 in 1801. The first thing that caught my attention on this occasion was the dramatic contrasts in dynamics and style. Sometimes it seemed every other note would contrast between piano and forte. Then there were the passages where a lyrical phrase in one instrument would be suddenly attacked by a sforzando in another instrument. The second movement gives us Beethoven experimenting with the form he has inherited from Haydn and Mozart. Here instead of the traditional slow, lyrical movement he presents a moderately lively fugue with a trio section laden with polyphonic conversation. The Lipkind Quartet excelled with its intricate precision and superb interaction.

The more traditional Menuet is compact with no trio section repeat and the return of the syncopated opening theme marked at a faster tempo than the first time around. This was another signature innovation of Beethoven to the development of the string quartet. The final movement is a spicy rondo. It is a monumental struggle between major and minor extending to the powerful coda, which then dissolves into an ending that is tinged with humor; Beethoven almost laughing at his own earlier histrionics! The technical skill and musical savvy of the artists brought calls of approval from the audience at the conclusion of Beethoven’s almost toss-off closing cadence.

Dimitri Shostakovich wrote fifteen string quartets. His late works in this genre, like Beethoven’s contain some of the most compelling intimate musical statements imaginable. The String Quartet No. 3 in F, Op. 73, written in 1946, begins this trend. It was presented as a “War Quartet” with five movements given the following descriptive titles: 1."Calm unawareness of the future cataclysm," 2. "Rumblings of unrest and anticipation," 3. "The forces of war are unleashed," 4. "Homage to the dead," and 5. "The eternal question: why and to what purpose?" These descriptions, however helpful they are in summarizing the mood of each movement, were withdrawn by Shostakovich almost immediately and he never gave an explanation.

The first movement begins with a typically Russian impish dance. It is innocent in character and is altered as it is passed from one instrument to another. As the movement progresses the key setting becomes more ambiguous and a sense of unease grows. The second movement increases the mood of unease and at the end ominously trickles off into emptiness. The third movement is vicious with rhythmic staccato attacks and is merciless throughout. The fourth movement is one of Shostakovich’s heart-rending dirges, expressing grief in an almost overwhelming way. It ends with the viola weeping over the sustained notes of the cello and moves, without pause, to the fifth movement which expresses a sense of spiritual progress, a mode not present in the later quartets. It ends quietly, fading away in a peaceful, but troubled conclusion far removed from the impish innocence with which the quartet began. The Lipkind Quartet demonstrated absolute mastery over dynamic control. I doubt that anyone in the audience was able to perceive the exact moment where the vibrations of the strings ceased and silence began. It was a moment of awe and drew enthusiastic applause from the appreciative audience.

The Lipkind Quartet was recalled to the stage several times by the sustained applause, and responded with an encore: the Menueto movement of Mozart’s String Quartet No. 15 in D, K.421, one of the six quartets he dedicated to Haydn. It was a perfect and delightful way to end an evening of grand chamber music.