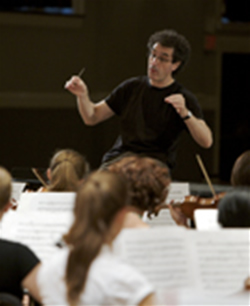 The Eastern Music Festival’s student orchestras (over 150 instrumentalists divided into two symphony orchestras) made their last presentations of the 2012 season on Thursday and Friday nights as the performances of the winners of the student Concerto Competition took place in the final days of the 51st season of EMF. This year, six soloists were chosen from the 40 or so young competitors: three string players, two woodwind soloists and one pianist. Half the group played Thursday night under Maestro José-Luis Novo and the others played on Friday, accompanied by the orchestra led by Thomas Hong, an assistant conductor on the EMF staff this year. I was privileged to attend Friday night’s performance.

The first soloist was also the youngest and one of only three 13-year old students in this year’s festival, cellist Sterling Elliott of Newport News, VA. Mature far beyond his years, Sterling delivered a strong performance of the third movement, Rondo, of Franz Josef Haydn’s Concerto in D for Cello and Orchestra, with a charming if short cadenza. Immediately one was won over by his warm tone and lovely vibrato – and then one begins to discover an amazingly talented young musician – excellent intonation, mastery of thumb position, great double stops (mostly thirds) and clean “off-the-string” bow technique. I look forward to hearing him again, hopefully soon!

Two-time winner of the EMF Concerto Competition, Nathan Lowry (last year he played Sarasate’s "Zigeunerweisen") took the stage to play the First Movement (Moderato nobile) of the Erich Korngold Violin Concerto in D, which we had heard last Saturday played by Tasmin Little also in Dana Auditorium. Graced with a beautiful and tender tone which shone best in the cadenza, violinist Lowry (18, Antioch, TN) certainly appeared to cover all the technical requirements of the concerto admirably. Unfortunately, the very large orchestra (43 string players, plus a large cadre of woodwind, brass and percussion instruments) played loudly and covered much of the solo line.

The third soloist on Friday night’s program, Mai Mizuno (18, Campbell, CA), played the first movement of Camille Saint-Saëns’ Piano Concerto No 2, in G minor, an 11-minute workout with only four measures of rest for the soloist. Unusual for a concerto, Saint-Saëns starts this one with the solo piano playing what sounds like a Bach Prelude. The orchestra is largely superfluous, playing long chords beneath the solo toccata. Miss Mizuni dominated the music from the start, with a strong technique and unflagging energy. Unfortunately the final three measures were not tightly together – this is one spot where the experienced soloist follows the conductor, not vice versa!

The stage emptied at break while the Eastern Young Artists Orchestra packed up to make space for the Guilford Young Artists Orchestra for the second half of the program, Leonard Bernstein’s ever-popular Symphonic Dances from West Side Story. Bernstein was a brilliant multi-faceted musician whose gifts were recognized early and encouraged by his teachers. West Side Story is based on Shakespeare’s Romeo and Juliet but set in Hell’s Kitchen in New York City. Orchestrated by Sid Ramin and Irwin Kostal in close collaboration with “Lenny,” the Symphonic Dances adapts several of the musical numbers from the musical into different dance forms (Cha-cha, Mambo, etc.) but in an order that better serves the music than the story.

Maestro José-Luis Novo conducted the large orchestra with verve and grace. For the most part the student orchestra played brilliantly, especially the very prominent percussion section. A couple of “clams” in the brass gave proof that some students were weary after the grueling 5-week intensive study and performance schedule. The ending, on a haunting unresolved chord repeated several times (echoing the word “Somewhere” from the musical’s song by the same name) caused this writer to think ahead to the closing of Saturday’s Festival Orchestra’s up-coming performance of Das Lied von der Erde whose last movement, “Abschied” (“Farewell”), ends similarly, with repeated but enigmatic unresolved “ewig….. ewig…” (Forever… ever…).