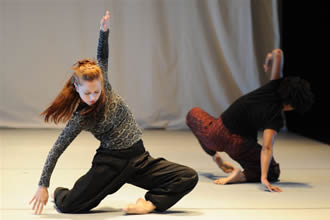 I’ve seen some things I hated at the American Dance Festival over the years. Most of them weren’t bad art: They ran counter to my tastes and philosophies. This week’s ADF program in Reynolds Theater, however, is weak — so weak, it is difficult to sit through. “Footprints,” with its premieres of ADF-commissioned works by three choreographers, is the new incarnation of what for some years had been called “Past/Forward,” in which one or two new works were presented along with reconstructions of one or two modern classics. “Past/Forward” succeeded the International Choreographers Commissioning Program, in which one often saw the strangest and most exciting new things. It was always a high point of the festival for me. What all three formats have in common is that the works are danced by ADF students, who spend part of their six weeks in the ADF School working with the choreographers to present the new pieces near the festival’s end. Students get great experience, and choreographers get the chance to work with large casts without large costs.

Maybe there was some requirement of the choreographers this time( seems unlikely), or maybe the appearance of long sections of pointless running in circles in all three works signifies something about the zeitgeist I just don’t want to face. Whatever, it will be a relief when this boring trend falls out of style, and dancing makes a comeback. And that pointless running was not even the worst of it.

Helen Simoneau (BFA from UNCSA, and currently a NC Arts Council Choreographic Fellow) started the program with her Paper Wings. I have no ideas about the relation of title to dance, as I saw nothing winglike or airy about it. Simoneau seems to have worked with some of the ADF School’s younger and less experienced dancers, and while their youth allowed them to excel at the drop, roll and rise sections that were the dance’s most interesting parts, it did no favors for the sections requiring more precision and control (arabesques, shoulder stands with legs angled) that were dotted among the plodding, pacing, running and posing. Simoneau had chosen dancers, all female, with a wide range of body types and sizes. They all wore tops of various styles in various shades of mauve, with navy skirts. The skirts had not been individually fitted, so every one hung differently, and when the dancers were lined up (all too frequently) the messiness of the image was maddening. Since the mess extended to the spacing of bodies, the arrangements of lines and shapes, and the non-similarity of shapes executed by the various dancers, I have to wonder: Did this choreographer set out to make a mess? If so, she succeeded.

Jodi Melnick’s The Darling Divide came next. Melnick is a far more experienced dance artist, with many prestigious grants to her credit. The work has bones, and stronger dancing by more advanced dancers. Still, it does not cohere. And there is pointless running. However, the costumes are much more interesting — stiff gray net over snug white underclothing — and designer John Brinkman demonstrates that he does know how to fit them to different body types. I would still have been bored by this, but not exasperated, had there not been a man seated on the stage apron with two open laptops glaring out at the audience. Turned out, this was the composer, Michael Wall, “playing” via computer. I cannot but think that a better location could be found for him.

Reggie Wilson’s Akulalutho, has the strongest dancing of the evening, to a strange mix of music that includes Lotte Lenya singing Kurt Weill; Donna Summer; Zakir Hussain, and several other highly rhythmic cuts from various cultures. The sections of dances are stuck together like images in a particularly bad postmodern painting, connected by — guess what! — running. The whole thing is given a factitious veneer of wholeness by Lotte Lenya both opening and closing the music cycle. The program notes that “akulalutho” means, in Zimbabwean Ndebele, “it means nothing.” I can add nothing to the perfection of that assessment.