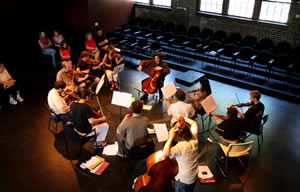 This preview has been provided by the Cary Cross Currents Chamber Music Arts Festival.

“Where is that man taking that big bass?  Is he coming back?”

The little boy stood firm waiting for an answer.   His hand was outstretched pointing to where Jan had been standing just a moment ago rehearsing with the Brussels Chamber Orchestra (BCO).  The musicians were packing up.

“The rehearsal is over,” I explained.

I motioned for Jan to come over.

“Would you like to put your hand on the bass while Jan plays something?”

I put his open hand on the side of the double bass.  Jan took out his bow and played a long low note.  Jan spoke with him for a moment then left.

“Will he come back?  Will the big bass come back?”

He looked at his mother.

“We’ll come back tomorrow,” she said.

“And the big bass will be here? And the violins and the violas?”

One of the reasons we started the Cary Cross Currents Chamber Music Arts Festival was to build a new/younger audience for classical music, and we felt free open rehearsals were a good way to engage people who otherwise might not ever attend a live classical music concert, most particularly, families with very young children.

Directing the Cary Cross Currents Chamber Music Arts Festival is a labor of love.  And, what I love most about it is seeing how the audience, both very young and old respond to this magical group.

What’s so magical about the BCO?  First, the musicians are young.  Most of them are in their late twenties, early thirties.  They are all virtuoso musicians who play in principal positions with orchestras around Europe.  But, the real magic is that they play without a conductor.

Rehearsals are lively.  There is no one standing between the audience and the musicians either in rehearsals or performances.  During rehearsals there is a lot of playing and negotiating.  There’s an occasional argument.  There are also moments of amazing grace and beauty.  It is mesmerizing.

As Chelsea Stith, a reviewer for the Classical Voice of North Carolina, noted in 2009: “The dynamic expressivity of each section is as irresistibly compelling to watch as it was to hear.”

My husband and I were attending a concert by the BCO in Italy a couple of years ago, and in the middle of one of their pieces, a young boy got up from his chair, walked down the aisle of the concert hall and stood in front of the musicians while they played.  He didn’t say anything he just stood there.  The musicians, in turn, kept playing.

I’ve thought a lot lately about both of these little boys: the one who wanted to know about the big bass, and the boy who was drawn to walk down that aisle and stand in front of the orchestra during a concert.  I wish a thousand little boys and girls would come this summer to hear these musicians play.

Surprisingly, they do sit still.  We rarely hear any child cry or ask to leave.   We did have one child cry last summer, but that was when his mother tried to leave because she had to get back to work.  He wanted to stay.

So, why would a small child want to attend a classical music rehearsal?  My best guess is that it’s because the BCO is a chamber orchestra with only 12 musicians.  Why would that matter?

Twelve is a manageable number for a child to watch.  They can see just about everything going on with the music.  It’s not the same kind of stimulus overload a full orchestra of 90 or more musicians might be.

Also, with only 12 musicians a small child can both hear and watch the music at the same time.  They can see when the violins are playing and when the cellos answer their call.  It grabs their attention.

This summer, starting on July 30th and running through August 11th, we’ll have eight open rehearsals and twelve concerts.  Six of the open rehearsals will be at the new Cary Arts Center, the other two will be at Glenaire off Kildaire Farm Road and the First Baptist Church Chapel on Academy Street in Cary.  All of the rehearsals are free and open to the public.  We’d like nothing better than to have a thousand young children come hear us play this summer.

For more information about the Brussels Chamber Orchestra and the Cary Cross Currents Festival, you can go to our website: www.carycrosscurrentsfestival.com.