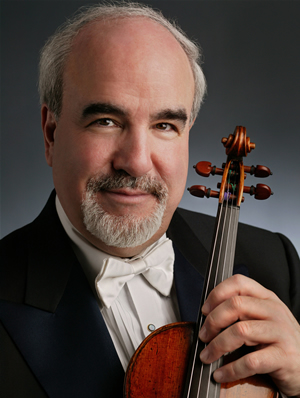 The outstanding pre-professional student orchestra of EMF is joined by guest artist Glenn Dicterow, violin, for an evening featuring Bartók’s Violin Concerto No. 1 and Rachmaninoff’s Symphony No. 2 in E minor.

Violinist Glenn Dicterow has established himself worldwide as one of the most prominent American concert artists of his generation. His extraordinary musical gifts became apparent at the age of 11 when he made his solo debut in Tchaikovsky's Violin Concerto with the Los Angeles Philharmonic. He went on to win numerous awards and competitions including the Young Musicians Foundation Award and Coleman Award (Los Angeles), the Julia Klumpke Award (San Francisco) and the Bronze Medal in the International Tchaikovsky Competition (1970). He is a graduate of Juilliard, where he was a student of Ivan Galamian. Other teachers have included Joachim Chassman, Naoum Blinder, Manuel Compinsky, Erno Neufeld, Gerald Vinci, Jascha Heifetz and Henryk Szeryng.

Mr. Dicterow has been a guest artist with the symphony orchestras of Baltimore, Birmingham, Chautauqua, Indianapolis, Hong Kong, Kansas City, London Symphony Orchestra, Mexico City,  Montreal, National Symphony in Washington, DC, and San Diego Symphony to name a few.  He has also soloed with the Gewandhaus Orchestra of Leipzig under the direction of Kurt Masur. Glenn Dicterow performed the Barber Violin Concerto on the New York Philharmonic's 1998 tour of Asia which included a concert at the Great Hall of the People in Beijing. Most recently Mr. Dicterow has played the concertos of Miklos Rozsa, Karol Szymonowski and Aaron Kernis's Lament and Prayer  with the New York Philharmonic.

He is on the faculty of The Juilliard School. Both Dicterow and his wife, Karen Dreyfus are founding members of The Lyric Piano Quartet, which is in residence at Queens College CUNY. More recently Mr. Dicterow was named Chairman of the Orchestral Performance Program at Manhattan School of Music in New York.

The mission of the Eastern Music Festival is to promote musical enrichment, excellence, professional collaboration, innovation, and diversity through a nationally-recognized teaching program, music festival, concerts, and other programs which will enhance the quality of life, health, and vitality of our region. The Eastern Music Festival and School, founded in 1961 in Greensboro, North Carolina by Sheldon Morgenstern, is an internationally-renowned classical music festival and institute for young musicians that runs for five weeks each summer. The institute accepts students ages 14 through 22 from around the country and the world. The EMF faculty consists of world-class performing artists selected from top orchestras and music schools nationally and internationally.  Led by music director Gerard Schwarz, the Eastern Music Festival and School celebrates its 51st season in 2012.