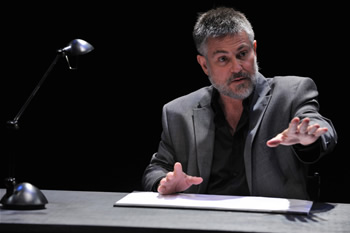 Burning Coal Theatre Company is taking a short break from its large-cast shows with a new production of St. Nicholas, Irish playwright Conor McPherson's lacerating portrait of a middle-aged sot of theatre reviewer in Dublin, a man who slacks his work, glories in his small power, cares not for his wife, and drinks a prodigious amount of alcohol. In the moments between waking and first drink, he doesn't like himself or his life, either. In those moments, he knows he's more dead than alive. Company artistic director Jerome Davis plays the Critic in this one-man, two-act, 90-minute monologue that's a story of harrowing transformative experience and shaky self-regeneration — with vampires.

Davis, whom one tends to think of as a director, is also an Equity actor, and he gives a subtle and nuanced performance in a credible Irish accent. His natural ebullience serves him well in the stories within the story, but he is able to tamp it down to show us how shaken and changed the man is. One of the difficult things in a dramatic monologue is finding small natural actions and keeping clichéd gestures from creeping in. Davis has been ably directed by Randolph Curtis Rand, who keeps him moving around just enough to help paint the story's action with his body. Davis is particularly good at conveying how exhaustively the Critic has been disillusioned by his experience with the vampires, how bitterly weary he is, and how aware, newly, tentatively, of Life.

This is actually the second time BCTC has produced this play with Davis in the role. It opened just in time for the great snow of 2000 and quickly closed again, with almost no one seeing it. My guess is that those ten years made Davis a much better Critic than the younger man would have been. In this production, the delicacy of his work is aided by the strict simplicity of black desk and chair before a blood-red patterned carpet, and especially by E.D. Intemann's emotionally affective lighting. There is also an interesting and unobtrusive sound design by Aharon Segal.

Being a McPherson play, St. Nicholas is a helluva story, with layers upon layers of character, commentary, allegory and philosophy, held together with lashings of bitter wisdom and awfully good writing, and that leaves you with a raft of unsettling questions. This coven of vampires the Critic falls in with — who do they represent? At times, it seems as if the Critic has found his people after years alone in the wilderness, sucking the blood of art. Is procuring fresh food nightly for the vampires so different from what he did back in Dublin, attending theatre openings, phoning his review in from the car for the delectation of the next morning's readers? But the vampires could also stand in for all the bad artists sucking the lifeblood of the critic — or for the newspapers (this was written when there were multiple newspapers with full-time critics) — or for the greedy public, always after fresh targets of flattery and scorn. Or possibly, and more traditionally, they represent the dangerous mad allure of sex, with its delicious seduction, life-giving refreshment, and "little death." When The Critic somehow grows a conscience, and would leave the vampires, he finds he's been clandestinely given a gift, and thus, I believe, the play's title. He escapes the coven of undead and gains currency to re-enter his old abandoned life by means of the only thing that rivals sex for power over human minds — a really great story.

St. Nicholas is a really great story, one that may keep you up late with a glass of whiskey and your strange thoughts… especially if you are a middle-aged theatre critic. The show runs through November 21 in the company's theater at the Murphey School and is highly recommended. See our calendar for details.