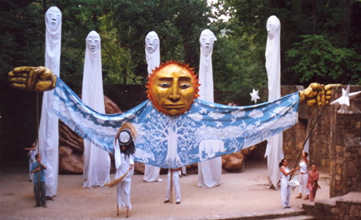 This preview has been provided by The Chamber Orchestra of the Triangle.

The Chamber Orchestra of the Triangle, a performance-based organization serving the Triangle community, concludes its 2011-2012 concert season on Sunday, May 20 at the Carolina Theatre of Durham. The season finale will begin at 3:00 p.m. and feature guest artists Paperhand Puppet Intervention, as well as guest soloists Erica Dunkle, Timothy Sparks and Timothy Hill.

“The COT continually looks to stretch its reputation of providing audiences an unusual repertoire,” says David Lindquist, COT board director. “This holds true for our season finale, as we believe this is the North Carolina premiere of the de Falla opera.”

Titled “A Journey Through Spain,” the concert will include performances of:

Prior to the start of the concert, Lorenzo Muti, COT artistic director and conductor, will present a lecture on the creative gestation of de Falla’s opera, its literary sources and musical style.

The afternoon will also feature performances by the following professional soloists:

Tickets may be purchased at the Carolina Theatre of Durham box office, 309 West Morgan St., Durham, N.C., or by calling 919.560.3030. To emphasize its commitment to engaging young people with great classical music, the orchestra provides free seating at every concert to students of all ages.

About the Chamber Orchestra of the Triangle:
Since 1982, The Chamber Orchestra of the Triangle has been received with genuine respect and enthusiasm by music critics and the community. Today, it is considered one of the finest professional ensembles in North Carolina and the Southeast. With its elite corps of musicians, the orchestra continues to present a well-chosen and unusual repertoire that delights audiences and evokes high praise from critics. That standard of excellence has become the hallmark of the orchestra and has distinguished each succeeding season. The 2011-2012 series marks its 29th concert season. For more information, visit www.thecot.org or call 919.360.3382.

About Paperhand Puppet Intervention:
Paperhand Puppet Intervention is dedicated to bringing many styles of puppetry and artistic expression to the Triangle area and the world. Formed in 1998 the organization strives to make work that inspires people, promotes social change, and is deeply satisfying for everyone involved. The puppet shows the organization creates are a synthesis of many art forms including (but not limited to): sculpting, painting, music, dance, improvisations, costume/set design and theater. Visit www.paperhand.org.