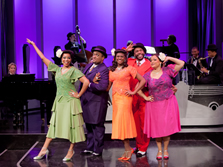 
The cast of Ain’t Misbehavin’: The “Fats” Waller Musical Show

If you've ever wondered what it would be like to live in the midst of the Harlem Renaissance in all its smoky, steamy, richly creative splendor, then you must experience Triad Stage's Ain't Misbehavin': The Fats Waller Musical Show.

This musical revue has been around since 1978, when it debuted on Broadway featuring the songs of Thomas Wright "Fats" Waller, pulled together for the stage by Murray Horowitz and Richard Maltby, Jr. It won the 1978 Tony Award for Best Musical and was revived in 1988 and again in a 2008 tour starring American Idol's Ruben Studdard.

The Triad Stage production is a collaboration with North Carolina A&T University, and it's a great one, again showing how Triad Stage reaches into the community to help develop local talent.

Donna Baldwin-Bradby directs and choreographs this show, her sixth at Triad Stage, with the N.C. A&T Jazz Ensemble and a cast of five pulling out the vocal stops. The scene is a nightclub in Harlem in the Art Deco-era. Scenic designer Fred Kinney has arranged this amazing nightclub set with tables and chairs on the floor in front of the stage where a few lucky audience members sit during the performance. It's kind of like getting to dine in the kitchen of a great restaurant.

The hot five in this production are Angela Birchett, Soara-Joye Ross, Jamia Tucker, Frank Viveros, and Richard Waits. Singing as an ensemble and trios, duets and solos, the group breaks out in no less than 31 tunes, many of them written by Waller.

It's not just entertainment, it's history, a musical retrospective that will stir memories with songs such as "Honeysuckle Rose," "Cash for Your Trash," "It's a Sin to Tell a Lie," and of course, the famous, "Ain't Misbehavin'," among so many others.

An audience favorite was Jamia Tucker, making her TS debut, who brought a level of energy to the stage that kept the laughs coming, especially in songs such as "Yacht Club Swing," where she showed up in an admiral's coat, hat, and short shorts, one of the few costume changes in the show, but definitely a popular one. Angela Birchett, who has toured with Hair Spray and Smokey Joe's Café, plays the role that put the late Nell Carter on the map and is a beautiful tribute to the that actress in songs such as "Mean to Me" and "It's a Sin to Tell a Lie." Soara-Joye Ross, who last appeared in TS's "From the Mississippi Delta," was an elegant addition to this trio of female songsters, exploring the limits of her upper register in Waller's "Squeeze Me". Perhaps the actors were strongest when in harmony, as in the melody, "When the Nylons Blooms Again."

And then there were the guys. Without a doubt, Richard Waits' rendition of "The Viper's Drag" with "The Reefer Song" was a highlight of the show, and it was a thrill to see this intense actor in his TS debut strut his stuff. Frank Viveros, in his Derby hat and two-toned shoes, gives us a role reminiscent of Fats Waller and anchored the show in songs such as "Your Feet's Too Big," with Ross in Hoagy Carmichael's haunting "Two Sleepy People," and in the finale, "I'm Gonna Sit Right Down and Write Myself a Letter."

The N.C. A&T jazz band was great, but when its conductor Mondre Moffett touched horn to lips, you knew this guy could get any joint jumpin'. Mondre was a trumpeter with the Duke Ellington Orchestra and is currently Professor of Jazz Studies at N.C. A&T. Lucky A&T!

Stephanie Lindley, music director and pianist, was an inspiration as she tickled the keys in these challenging arrangements that brought out her own acting skills as a Triad Stage veteran. She was not just playing the piano on these difficult musical numbers - she was giving the piano a face and making it a character.

Part "Dancing with the Stars," part musical documentary, part Harlem dream world, this is a Triad Stage show one shouldn't - and ought not - miss!

The show continues through May 13. For details, see the sidebar.