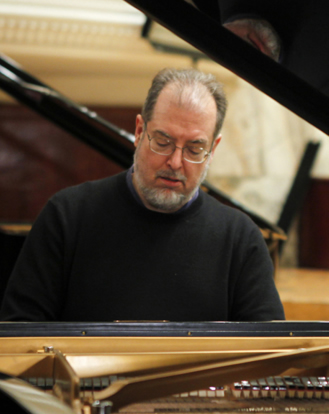 The Chamber Arts Society of Durham, in association with Duke Performances, presented yet another world-class string quartet at a very reasonable ticket price in a comfortable and somewhat acoustically friendly hall. What music lover can ask for anything more? How about a big name pianist joining in? The Takács Quartet, based in Boulder at the University of Colorado much like our Ciompi Quartet here at Duke, returned to the Reynolds Auditorium stage along with guest pianist Garrick Ohlsson.

If one were forced to provide a theme for this concert it might well be “asymmetrical chamber music.” An overwhelming majority of string quartets, regardless of the time period or musical language, are four movement affairs and generally balanced as far as fast/slow and mood. Tonight’s concert consisted of a seven movement string quartet followed by a five movement piano quintet, which might at least in part account for a slightly imbalanced feeling by the end.

Beethoven’s final five string quartets took up a major portion of his compositional time and energy in the final four years of his life, and both players and audiences are still grappling with the unprecedented demands of these works. There is plenty of truly great music where, to some extent, you can just lay back and let it wash over you; this is not meant as an indictment of those works by any means. However, these quartets, and particularly his String Quartet No. 14 in C sharp minor, Op. 131, demands focus, concentration and a personal commitment to at least attempt to delve into the solemnity, mystery and complexity of Beethoven’s vision; definitely not something to pop into the CD player while you are cleaning the house.

The opening movement is a slow fugue with the subject first being presented by first violinist Edward Dusinberre. Here is an example of the counter-intuitive notion of what is difficult string playing: very quiet and slow can be even more treacherous than flashy virtuosity. This started shaky and tentative but as the subject was passed around it settled down nicely. Second violinist Karoly Schranz, violist Geraldine Walther and cellist Andras Fejer each played with utmost tonal purity. This quartet is not only in the very unorthodox form of seven listed movements, but it is Beethoven’s only string quartet where there is no pause between any of the movements. I say “listed movements” because some are just transitions or brief bridges between larger movements. The fourth of these is in itself a further subdivided list of six tempo markings, mostly tending towards the lugubrious. It is here I sensed an abandonment of the psychological immersion necessary to effectively communicate with the listener and a reversion to “another day at the office” playing. There was a nice recovery during the fifth movement, a rollicking Presto that whenever I hear it I immediately think of it as “cartoon music” where you can imagine a cat and mouse chase scene. Overall, it just seemed a bit lethargic on both ends of the dynamic and emotional spectrum. They never quite achieved a sense of deafening pianissimo or that extra burst of energy and volume that was needed in certain passages to get a “this amp goes to 11” feel. That was all to change in the second half.

Invite a pianist to perform with a string quartet and it would be a safe bet that they will perform one of the piano quintets by Schumann, Dvořák or Brahms – each one is a classic, but there are others that certainly deserve a hearing. Here we heard a relatively rare reading of the Piano Quintet in G minor, Op. 57 by Dmitri Shostakovich, and I am a bit embarrassed to confess that this performance fell on virgin ears. Joining the Takács Quartet was the celebrated pianist Garrick Ohlsson, a mountain of a man who had played a solo concert at Duke the previous evening. The premiere of this work was given in 1940 in Moscow with the composer at the piano and the Beethoven quartet, the group for whom he had written it. It was a crowning achievement for Shostakovich both artistically as well as financially, making the paucity of performances even more puzzling.

To use a decidedly lower brow expression, I was simply blown away by both the work and the passionately involved performance. Maybe it was Ohlsson’s imposing presence, but all musicians suddenly came alive and played as if the ghost of Shostakovich was directing them. The structure of this quintet is somewhat like the Beethoven quartet – a slow first movement followed by a slow, stately and magnificent fugue. Although based on a Russian folk song, it is a Bachian masterpiece, yet still infused with the unmistakable Shostakovich sound. This was even more evident in the following Scherzo, a wild ride with that sardonic, sarcastic and even psychotic wit that can’t be mistaken for any other composer. Ohlsson could coax earth shattering chords from the piano and follow it with the most sensitively wrought lyrical quietness that the Steinway could produce. This was remarkably effective, especially since the work ended on a placid, peaceful plane. Absolutely riveting.