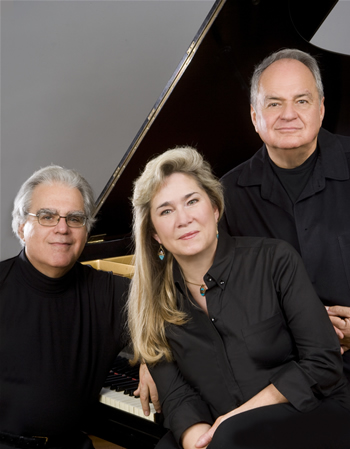 It was a breezy and cold afternoon (though sunny) on a frigid weekend, but the reduced crowd of listeners who made their way to the Fletcher Opera Theater at the Progress Energy Center in Raleigh for the performance by the Kalichstein-Laredo-Robinson Trio found a heart-warming reward waiting for them. Featured on the concert was a new commission from American composer Richard Danielpour (of which more below). This was supported jointly by a total of eight organizations nationwide, including the Raleigh Chamber Music Guild, which presented a pre-concert talk with four composers already commissioned by RCMG – Robert Ward, Stephen Jaffe, Allen Anderson, and Penka Kouneva. The wide-ranging discussion included consideration of writing for film, for the opera stage, and even for video games (an area where Kouneva, youngest of the composers represented, has worked extensively).

The concert program by the Kalichstein-Laredo-Robinson Trio (a group with almost 35 years performing together) began with one of three duos that made up the first half, the Mozart Sonata for Violin and Piano in A, K305. This ought rather to have been listed as a sonata for piano with violin, since it belongs to that genre where the piano does most of the work, common in the classical period (a violin sonata, at this time, would have been scored for violin supported by a continuo bass, where only the left hand of the piano is written out, with the right hand improvised - filled in by the performer, and so we hear far fewer of these, since someone must either write out or improvise the part). Such a piece has built-in balance issues (Mozart’s piano would have been much quieter, simply due to its construction), which meant that Jaime Laredo sounded rosiny and rough in tone in the initial allegro in trying to match the grand piano (far from the suavity of his playing in the later works). Joseph Kalichstein coaxed a smooth Mozartean sound from his Bluthner piano, clear and light.

Were I to be truly curmudgeonly, I might suggest that another work from the early 20th-century might have shed more light on the rest of the program. But I won’t.

Next up was a duo, the Sonata for Cello and Piano (1915), a rather late and unfamiliar work by Claude Debussy, from close to the end of his life, and not surprisingly, a rather elegiac tone, with writing recalling the books of Preludes from only a few years earlier (1909-1913). A perhaps more-than-usually loose structure made the narrative a little difficult to follow. The performers - Sharon Robinson, former cellist of the Ciompi Quartet, and Kalichstein - displayed both admirable rhythmic freedom and connection, particularly in the central Serenade.

For me the high point of the program came with the commission, Inventions on a Marriage, from Richard Danielpour (b.1956), written to celebrate the 35th anniversary of Sharon Robinson and Jaime Laredo, with seven movements imagining moments that might take place in the life of any married couple, and charmingly explained prior to the performance by Robinson and Laredo (Mirror image – Heroics – As you were sleeping – Argument – Reconciliation – Celebration – Good Night). Indeed, these seven vignettes were probably moments that most listeners could easily identify with, and they were represented in language that was neither over-modern and inaccessible on the one hand, nor tiresomely clichéd, on the other, but just right – beautiful, warm, wry, real, reassuring, and given a performance that brought across all the rich nuance in the work, which will certainly soon join the repertoire. Perfection!

After intermission, the trio presented a work whose dimensions virtually matched those of the three on the first half, the Ravel Trio in A minor (1914), about a half-hour in length. Once more, the first movement was elegiac in tone (I suppose there was something about that moment at the beginning of the War to End All Wars that elicited such feelings). It was followed by a sort of scherzo (a Pantoum, or poetic form from Malaysia), and a passacaille (a 17th-century repeating ground bass in 3/2), leading to what sounded like the fluttering of birds' (or angels’) wings to announce the finale.

The excellent playing by the trio meant that they were rewarded by a warm ovation from the listeners; they played a lovely arrangement (by Andy Stein) of “Summertime” to warm us up before facing the winter breezes.