The ambitious work of one of the South’s greatest writers is performed in two parts in rotating repertory, February 12 – March 18, 2012 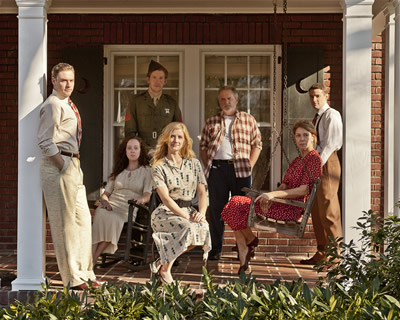 This preview has been provided by Triad Stage.

Utilizing two different casts to tell a story spanning four decades, Triad Stage and NewBridge Bank present the entire New Music trilogy by Reynolds Price, directed by Preston Lane, in a two part extended run — Part I, comprised of the plays, August Snow and Night Dance, and Part II, the final play in the series, Better Days — produced together for only the second time since they were written. Enter a small town in eastern North Carolina and witness the lives of the Avery family and their friends. Part I begins in August 1937 with August Snow. One year into their troubled marriage, Taw Avery gives her husband, Neal, an ultimatum — he must put his past behind him or she will leave him forever. With less than a day to decide, they each make a journey of self discovery to find the meaning of commitment and sacrifice. Their story continues in Night Dance at the end of World War II. The battle may be over, but the loss of lives and dreams continues in its wake. Neal and Taw must carry on, searching for a way to keep hope and love at the heart of their family. In Part II: Better Days, friends and visitors gather to comfort Neal and Taw after the death of Neal’s mother, Roma, thirty years after the events in Night Dance. Their son, on leave from Vietnam, seeks a destiny beyond his family’s roots. When Roma’s will reveals a startling surprise, conflicting desires threaten to leave everyone in a state of uncertainty, and they will need enormous courage to meet the future in a swiftly changing world. The two parts of New Music are performed in rotating repertory. Part I: August Snow and Night Dance runs February 12 through March 17, 2012. Part II: Better Days runs February 21 through March 18, 2012.

Reynolds Price was born in the town of Macon, North Carolina in 1933 and spent much of his childhood moving from town to town as his family struggled financially. While attending Duke University as an undergraduate, he became a student of Eudora Welty, who introduced his writing to her agent. After graduating summa cum laude from Duke University in 1955, he attended Oxford University in England as a Rhodes Scholar to study the works of John Milton, before returning to Duke, where he taught as a James B. Duke Professor of English for more than 50 years. During that time he received the University Medal for Distinguished Meritorious Service, the university’s highest honor, and the Distinguished Alumni Award. A professorship in creative writing was established in his name in 2008. The novel, set in his home of eastern North Carolina, was praised for its Southern voice and solidified Price’s emergence as the best Southern writer of his generation. It also received the William Faulkner Award for notable first novel, one of numerous awards he earned for his more than 40 novels, plays and collections of short stories and poetry. His novel, Kate Vaiden, completed in 1986, won the National Book Critics Circle prize for the year’s best work of fiction. His 1994 memoir, A Whole New Life, details his struggle with spinal cancer that had left him partially paralyzed and confined to a wheelchair since the mid 80s. Price passed away on January 20, 2011 from complications of a heart attack.

“ONE CITY, ONE AUTHOR”

New Music is a part of the Greensboro Public Library’s “One City, One Author” program, Reynolds Price: The Writer, The Teacher and North Carolina Native Son, a four-month long celebration of over two dozen events honoring Price and his work. “Producing the New Music trilogy in its entirety is the largest project upon which Triad Stage has ever embarked and we are thrilled to partner with the Greensboro Public Library,” states Managing Director, Richard Whittington. “It is the perfect combination of the arts and literacy,” says Beth Sheffield, Programming and Readers Advisory Specialist at Greensboro Public Library. “We have a great slate of programming for the community.” Lectures, art classes and book discussions centering on Price’s Kate Vaiden and A Whole New Life are the focus of the Greensboro Public Library’s free events. Triad Stage will host two of the events in its UpStage Cabaret, “Reynolds Price: The Writer” with Fred Chappell, Daphne Athas, Dr. Hephzibah Roskelly, Michael Parker and friends on January 30; and a poetry reading, “Toasts for Reynolds” with Vic Strandberg on April 10.

More information about “One City, One Author” events can be found online at www.friendsofthegreensborolibrary.org.

The first play of the New Music trilogy, August Snow, was commissioned in 1984 by Hendrix College in Arkansas. Price continued on the remaining plays over the next two years, and the entire trilogy had a workshop performance by Steppenwolf Theatre Company in 1987. It premiered in its entirety in 1989 at Cleveland Play House. Until now, no other theater company has mounted all three plays together again.

In keeping with its mission to foster a Southern voice, Triad Stage produced August Snow in 2003 as part of its second season. Price himself traveled to Greensboro to see the show and spoke to a standing room-only crowd for the post-show InSight Series where he praised the production as “the best production of his play he’d seen since he wrote it.” Then the wheelchair-bound Price stunned the audience by lifting himself ever so slightly — despite immense pain — to give the production his version of a standing ovation. He returned two more times to see the show and have dinner with the cast — always addressing each of them by their character’s name. As the admiration and respect for him grew, Triad Stage made a pledge to produce the remaining pieces of the trilogy, a pledge sadly unable to be fulfilled before Price’s passing last year.

Artistic Director Preston Lane, who is directing both parts of New Music, remembers the first production at Triad Stage, “There was a perfect synthesis of bringing together a North Carolina writer, a story of a North Carolina family and a North Carolina audience.” On the work as a whole, he says, “New Music is an audacious piece of writing. It is written with heightened language that captures time and place, exposing familial wounds and the terrors of the modern age. Price’s work juxtaposes personal heartbreaks with war and the ravages of time. These plays are like discovering a box of family photos hidden in an attic — mementos of where we came from, how we got here and who we are.”

Part I and Part II are performed by separate casts which include some new faces as well as several who are familiar to Triad Stage audiences. Part I: August Snow and Night Dance features Mark Mozingo as Neal Avery and Broadway veteran Gayton Scott as his mother Roma Avery, both in their Triad Stage debuts. Completing the Part I cast are Ginny Meyers Lee (Providence Gap, Oleanna, Brother Wolf) as Taw Avery, Matthew Delaney (A Christmas Carol, Providence Gap) as Porter Farwell, Leah Turley (Providence Gap) as Genevieve Slappy and Chris Raddatz (Masquerade) as Wayne Watkins. Bill Raulerson (Bus Stop, Brother Wolf) as Dob Watkins appears in both Part I and Part II.

All Triad Stage productions feature the bold acting and breathtaking design that have been nationally recognized by The Wall Street Journal and by the American Theatre Wing, founder of the Tony Awards®, which named Triad Stage one of the top ten most promising theatres in the country as a recipient of the 2010 National Theatre Company Grant. Triad Stage has also earned accolades including “Best North Carolina Production of 2010” for The Glass Menagerie by Triangle Arts & Entertainment magazine; “One of the Best Regional Theatres in America”, New York’s Drama League; “Best Live Theater”, Go Triad/News & Record andThe Rhinoceros Times; and “Professional Theater of the Year”, North Carolina Theatre Conference.