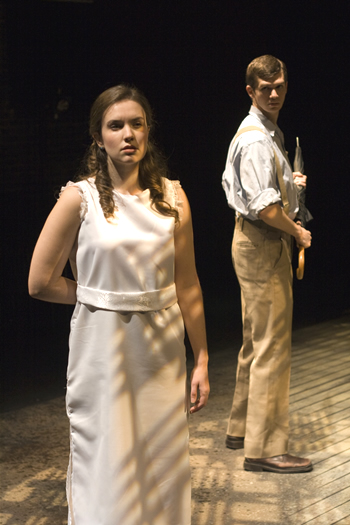 If your New Year's resolution is to attend more theatre, Mary's Wedding is the show to see. Even if your New Year's resolution isn't to attend more theatre, Mary's Wedding, at Burning Coal Theater Company in downtown Raleigh, is a must-see. Under the creative direction of Josh Benjamin, Caitlin Davis (Mary) and Matthew Hager (Charlie) bring to life the story of a young couple in love for the first time and separated by World War I. Stephen Massicotte's beautifully written piece travels seamlessly from Mary's dream to the couple's reality and from Charlie's warfront in France to Mary's quiet countryside in Canada.

Anyone with the good fortune of attending should try to sit in the balcony, where the work of the designers can best be observed. Curt Tomczyk's attention to detail in the texture of the simple set design gave the intimate space as seamless a transition from the trenches to the country side as Massicotte's well-spun script. Stephen West's lush lighting design heightened each scene and painted the set with such richness that the floor seemed a projection screen itself from the view in the balcony above. The use of an actual projector proved most beneficial for Mary's Wedding, as images of Canadian countryside bled into images from the first World War, each scene evoked a new response as the characters tried to cope with the losses they experienced as a couple and individually.

Hager's unassuming compassion as Charlie paired with Davis's charm and eagerness as Mary portrayed an honest depiction of young love, juxtaposed with the harsh brutality of a war. Whether the audience was most moved by the couple's faithfulness despite the hardships of the war or by the hopelessness of the young love torn by war, Mary's Wedding moved and inspired from beginning to end.

Mary's Wedding continues its run through 1/22. For details, see the sidebar.