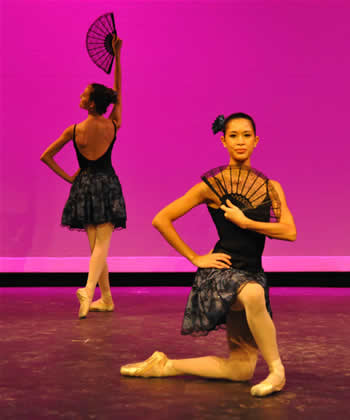 Whether we're ready or not, the holiday season – in truth, a time of many diverse observations and celebrations – is upon us. The major ones may perhaps best and most meaningfully be experienced in reflections of the awe, joy, and delight in the eyes of children – little folks encountering their very first services, of course, and their first hints of family traditions, too, but also their first seasonal concerts, Nutcrackers, Messiahs, hand bell entertainments, Amahls, and, especially, programs given by other youngsters…. There are lots from which parents and grandparents may choose. And sometimes the delights of the older folks match or exceed the kids' pleasures.

One such program – a very generous one – was presented by the estimable Philharmonic Association in Meymandi Concert Hall, on Pearl Harbor Day. It was rainy and cold outside, but many hearts were warmed, inside. For openers, a noteworthy jazz trio, coached by Gregg Gelb, held forth in the lobby, the artists positioned alongside the double bust of Ben and Maxine Swalin, who surely would have admired the playing. The musicians – Nathan Huvard, guitar, Adam Maloney, bass, and Grayson Nivan, drums – sounded mature beyond their years in music by Brubeck and other standards, and it's a pleasure to be able to report that the concert's awaiting patrons gave the threesome respectful silence as the tunes unfolded.

Meanwhile, in the hall, the Triangle Youth Philharmonic, which lists 96 players on the published roster, and which is the PA's "senior" orchestra, was ready for the concert. The program was somewhat typical of seasonal orchestral offerings hereabouts – some serious fare, some lighter material, a nod – in this case, a substantial one – to non-Christian traditions, and, along the way, some delightful surprises. There weren't any formal program notes, but there were brief, generally insightful comments on the works by members of the ensemble. The Association's Music Director, Hugh Partridge, conducted.

Four pieces by Leroy Anderson were heard – an opening "Christmas Festival" that doubled as an overture, "Bugler's Holiday" (a nice touch for a solemn national anniversary), featuring (trumpeters) Dain Clare, Samuel Jasper, and Stockton Ray, "Blue Tango," which seemed largely to play itself (inasmuch as the conductor left the stage, clearly hoping dancers from the crowd would have taken the lip of the stage – none did), and to cap the evening, "Sleigh Ride," this time led by the young winner of a guess-the-number-of-carols contest from a bit earlier in the evening.

Along the way were two excerpts from Handel's Messiah – transcriptions of "He shall feed his flock" and The Chorus, for which the crowd was prompted to stand – and a truly lovely performance of the opening movement of Vivaldi's "Winter" (from The Four Seasons), deftly introduced and given by concertmaster Katherine Gilger (whose reed-like physical presence again prompted the old refrain, "Ah, to be so young, so thin, and so talented!").

The first part of the program ended with Terry Mizesko's stirring Chanukah Celebration, a three-movement suite consisting of a hymn, two contrasting dances, and a song of hope that is today best known as Israel's national anthem. The NC Symphony's bass trombonist has produced numerous works for orchestra for various occasions, ceremonial and otherwise. This is one of the very best and surely most enduring of them all.

The performances throughout the evening were, with one challenging exception, exemplary – one would only rarely have guessed that the top age of the players in the TYP embraces high school seniordom!

That challenging exception was the evening's world premiere work, "Carol Fantasia," by the 14-year-old Christopher Baczkowski, a child of friends of the conductor and his wife in the UK. The piece is an arrangement of the young man's favorite carols, starting with "Once in Royal David's City," beloved of boy sopranos around the world; it encompasses some 20 more tunes, many in darker guises than one might expect and, according to Partridge, in some exceedingly tricky settings. Someone reminded us that the TYP had played its main fall concert only a little over two weeks earlier so there was limited rehearsal time for this concert; in this number, a bit more polishing might have helped, but that said, the work is commendable by any standard and it was very warmly received.

The grand finale – aside from "Sleigh Ride" – was a stirring and truly beautiful suite of excerpts from Tchaikovsky's Nutcracker – the Marche from Act I, and the Tableau II Scene, three character dances (Chocolate, Coffee, and Tea), and the grand Pas de Deux from the end of Act II. The orchestra was radiant in this music, and the experience was elevated to an exceedingly high level by the presence of dancers from the International Ballet Company, now based in Cary, who performed choreography by Miguel Campaneria. The Snow Queen and Snow King were danced by Anissa Bailis and Zavier Nunez and then, following the character pieces, the Sugarplum Fairy and her Cavalier were Regan Kucera and Paul Branco.* The divertissement numbers were danced by Thalia Hernandez and Chandler Proctor, Shannon Gerney and Preston Chamblee, and Ryland Acree, Sydney Dolan, and Hannah Summers. This part of the evening, which consumed about 20 minutes, served to remind all present that the thrill of this perennial holiday favorite, the ballet that has topped the charts in the US since Balanchine reintroduced it here in 1954, can do absolutely all it needs to do – and more, too – with just the music and the skillful motion of young dancers.

"Sleigh Ride" was in a sense an anti-climax, but it was a welcome curative for the tears that formed in the eyes of many of us during that glorious Pas de Deux.

Well done, PA & Company! May this holiday concert be just the first of many.