Playing With History: Henry V (on Trapeze) at Burning Coal 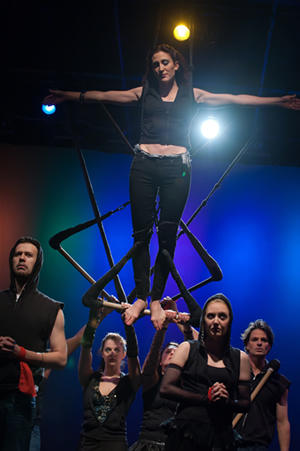 Raleigh's Burning Coal Theatre Company engages in many alliances and collaborations, often surprising and worthwhile. BCTC's current production, for which they've teamed with New York-based Fight or Flight Theater Company, is an aerial staging that gets Shakespeare's Henry V off the ground in a new way. Fight or Flight's dramatic trapeze artists work with several local theater artists on this production, which opened to an overflow audience in the Murphey School.

Producers of Shakespeare are always seeking ways to make the old words fresh and the scenes vivid with meaning for contemporary audiences. Fight or Flight's dynamic stage pictures (amazing what can be visualized with people on trapezes) and its aerialism put it within the realm of physical theater (another, extreme, example is Washington, D.C.'s Synetic Theater, which performs Shakespeare without the words), and its choreography at times brings it close to dance, or at least to a dance party. The physicality, the music, the sexual innuendo and the general irreverence make this Henry V an easy-to-enjoy version. In spite of much multiple casting — eight actors play 27 parts — it is no trouble to follow. We don't actually need to know who all those people are — we just need to know which side they are on at the moment. That is accomplished by their use of red (English) or blue (French) cloth signifiers they wear or hold, and change as needed when they switch characters.

Thus the action story proceeds unhindered by the small stage, the minimal cast, the lack of props. It is snappy and often humorous, with Shakespeare's own jokes and those added to accommodate the form, which entails the actors soliciting the complicity of the audience with direct comment. John Allore, who has six parts, makes a running gag of his changes. What we do not get with this approach is any sense of who the characters are, or why Henry V and the battle he wins against the French are so important to English history.

Daniel Loeser, from Fight or Flight, makes a good Henry, up to a point. He speaks well, he's physically powerful (looking very much the god of war at times)…but he doesn't make you feel any of the qualities that made Henry adored by his people and able to lead a ragged army of yeomen to one of the most preposterous marital victories of all time. This affectless quality pervades the performance. The one exception is Jenn Suchanec, who packs more nuance into her characterization of the French envoy than is seen in all the other characters combined. If all the actors exhibited the same force and delicacy in their interpretations, the clever trapeze work with its beautiful feats would seem more meaningful.

Still, the trapeze work is quite worth seeing, and this Henry may be considered a prologue to another version that will appear on the PlayMakers stage next spring. The mere fact that two stagings of a rarely-seen Shakespeare history play are being created within a few months of each other speaks volumes about the maturing theater scene in the Triangle.

Henry V (on Trapeze) continues through Dec. 18 at Burning Coal. See the sidebar for details. Of special note is the upcoming Lobby Lecture by historian Philip van Vleck, who will speak on Henry V and the Battle of Agincourt Dec. 10, 6 p.m.