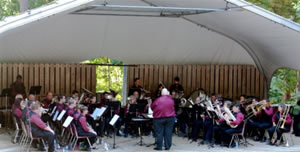 To kick off the Triangle Brass Band’s “Journey to the Moon,” director Tony Granados chose “2001: A Space Odyssey,” the oft-employed opening lines from Richard Strauss’s great tone poem. So, to all those classically oriented members of the audience, Thus Spake Zarathustra. The setting was the wonderful new (as of this past summer) Cary Arts Center, the presentation again demonstrating that there is not a bad seat in that fine refurbished house.

Complementing the eleven space-related selections was a Journey-to-the-Moon narration clearly enunciated by Phil Lewis, from a succinct and helpful text by Teresa Stallings.

[Narration: “…and the space race was truly on.] In John Williams’ stimulating theme from Far and Away, the players sailed off into the wild blue yonder. […advancing to the stars…] Yet another theme, this one by Bill Conti from The Right Stuff, moved still closer to the stars. […in the shadow of the moon, elusive stars have reappeared.] With Bart Howard’s “Fly Me to the Moon,” the players were in their true comfort range, creating the finest jazz from the Big Band era, syncopating at every opportunity. […ever foreboding, space still beckons us.] Here was presented probably the grandest work of the evening, leading into intermission. “The Dark Side of the Moon,” by the prominent British composer and performer Paul Lovatt-Cooper, depicted all the mystery and fearsome aspects long associated with that far side of the moon. The piece justified the celebration that composer enjoys throughout the brass band world. The wonderful orchestration, the superb cornet solos, and the cornet-percussion combinations led up to a truly exciting and frenzied conclusion.

That very same Lovatt-Cooper was called upon to open after intermission. His “Enter the Galaxies” was much of the same elegant stripe as his earlier offering, done up in top-drawer fashion by the players. […earthman himself was all along the legendary man-in-the-moon.] In such a program, a selection from Holst’s The Planets was of course mandatory. Granados here chose “Jupiter,” that bringer of jollity, yet featuring one of the most engaging melodies in all the literature. […going out with a bang.] Beethoven’s dreamy “Moonlight Sonata” contrasted pleasingly with the cool jazz of Van Morrison’s “Moon Dance.” […the earth – a giant swirling blue orb…a precious jewel floating in space.] A couple of masterly themes brought the cosmic evening to a close: James Horner’s from Apollo 13, along with that of John Williams from E.T. The Extra-Terrestrial.

For those who have not yet made the trek into outer space (perhaps most members of that audience!), here was the next best thing. Many thanks to that intrepid (brass) band of space travelers who furnished the transport.