Young Virtuoso Violinist Is a Winner 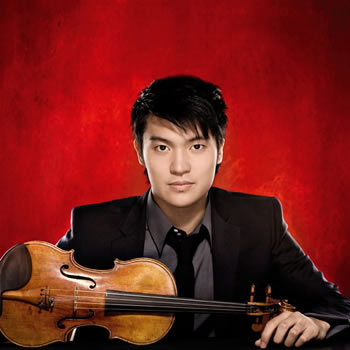 The Greensboro Symphony Orchestra, with Music Director Dmitry Sitkovetsky presiding from the podium at War Memorial Auditorium, served up course two of its “Season of Winners” theme Thursday night before a large audience. The “winner” for this concert was 22-year old violinist Ray Chen, who garnered the First Prize at the 2009 Queen Elisabeth Violin Competition in Brussels. What a treat it was to hear him perform a quintessential romantic work, Max Bruch’s Violin Concerto No. 1 in G minor, Op. 26.

This three-movement work, penned in 1866, is one of the most popular concertos in the repertoire. It is unusual in structure in that it begins with a slow-moving Prelude that features several short cadenzas from the soloist. Evident from the outset was Chen’s beautiful tone — fervently romantic and impassioned. The Prelude moves directly into the slow second movement, the heart of the concerto, chock full of warm melodies. The finale is full of life and provides the soloist with numerous passages of fireworks and double stops. A standing ovation resulted.

Chen returned to greet the enthusiastic crowd, and offered a solo violin work by Paganini — again, full of double stops and pyrotechnics, proving once again, that this young violin virtuoso is the real deal. At times it seems as if the player and the instrument (a 1721 Stradivarius) were a single unit that provided heart-felt music.

The second half of the evening featured a single work, Symphony No. 8 in G, Op. 88 by Antonín Dvořák (1841-1904). Although not as popular as the composer’s “New World” Symphony, there is much to like in this 1889 work. The music is influenced by the composer’s Bohemian roots, with folk tunes appearing at every turn.

One of the distinguishing elements is the frequent use of the timpani and the low instruments. For example, the first movement begins with a drum roll that introduces a gorgeous cello tune in G minor; eventually the horns and winds join in. But the work is primarily cheery in nature despite this rather dark opening. Another distinctive motive is the birdcall flute motive that returns later in the work.

The Allegretto grazioso third movement is a model of elegant and sophisticated tunefulness, which the GSO presented in all its glory. I must confess a special fondness for this movement, as it was the sign-off music used by the NPR radio station when I was in graduate school at Indiana University (WFIU).

I’ve often thought that the GSO loves to play this full-throated romantic type of fare, and tonight’s concert proves my point.  Strings soared in the high lyric section, winds provided wonderful folk-like tunes that appear in many of the movements, and the brass came on like gangbusters, especially in the opening of the finale and at the very end.

The evening opened with a warhorse of the orchestral literature, “The Moldau,” by Bedrich Smetana (1824-1884). This composer is known as the father of Czech national music and for good reason. Folk music, dances, and scenes from his native country are never far below the surface of his music. “The Moldau” is one of the movements from his My Country, a cycle of six symphonic poems describing various aspects of Czech life and culture.