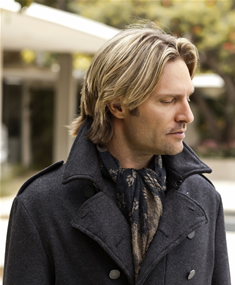 It has been said that composer Eric Whitacre has the status of a rock star among high school and college choruses, and I believe it.

Several years ago I was privileged to be a part of the presentation of the Triangle Youth Chorus Trophy to a high school choir in Raleigh. They were invited to sing one piece for the presenting group and were given a choice between “Ezekiel saw the wheel,” that wonderful old war horse, always a joy to sing, and a piece by Whitacre full of harmonic dissonances; a real test to tuning and intonation. They chose the Whitacre.

So it is not the clever on-line “Virtual Choir” or the accessible and affable personality or the photographic good looks that makes him a star among the young. It is the music! It is his creative choice of text, his inventive use of melody shaped with care and precision through harmony which is rich with dissonance yet tempered with mystical resolutions.  It is music that sounds different from most you have heard yet sits comfortably within the inner spirit.

The Duke Chapel concert, which was a celebration of the phenomenon and the music of Whitacre, opened with the Duke University Chorale under the leadership of Rodney Wynkoop, Director of University Choral Music. Their performance of Ernani Agular’s “Salmo 150” (Psalm 150) illustrated the excellence for which Wynkoop’s choirs are justly praised: precision of articulation, accuracy of intonation, and perfection of dynamic phrasing. The motet, sung in Latin, is full of rapid and rhythmically tricky lines and was delivered exquisitely.

Wynkoop next welcomed Whitacre to the podium to whoops and cheers, especially from the enthusiastic high schoolers who had already spent time with him in rehearsing their part of the concert that was to come later. Whitacre’s first selection was his latest composition, The City and the Sea, a setting of five selected poems by the unique American poet e. e. cummings. Introducing the piece, he declared it is his intention to add more cummings poems under this title. The first section is a rhythmic setting of “i walked the boulevard,” with rich harmonies and text painting reflective of Whitacre’s understanding of the inner meaning of the words. The second section is a mystical setting of “the moon is hiding in her hair,” delivering all that one expects from a Whitacre composition: textual sensitivity, tight and rich harmony, and evocative effects. The third is “maggie and milly and molly and may,” a lyrical setting of the well-known poem that describes what the four maids bring home from the sea; it ends with the line, “it’s always ourselves we find in the sea.” The fourth poem, “as is the sea marvelous” has an adventurous feel about it, and the fifth, “little man in a hurry,” is an energetic romp. All together this is a pleasant suite of choral settings. The harmonic structure is based on the white notes of the piano in tone clusters (in this case, four sequential notes played with the four fingers of each hand and with the thumbs acting independently). It required a virtuosic and athletic performance from Chorale accompanist, Mary Hamilton.

Next came “A Boy and a Girl,” a vivid tragic poem by Octavio Paz. It is a perfect gem of text and mood coming alive powerfully in music. Its rich deep harmonies sung so beautifully communicated tears from the poet through the composer to the listener. This was followed by a collection of poems by Ogden Nash titled Animal Crackers, Volume I & II that displayed Whitacre’s skill at reflecting humor in his music.

The Chorale concluded their portion of the program with Whitacre conducting his very first composition, “Go, lovely rose!,” a setting of Edmund Waller’s gorgeous seventeenth century lyric poem. The composer here shows us his natural gift for warm, sumptuous sounds.

After a brief break to arrange seating for the Duke University Wind Symphony, conductor Verena Mösenbichler-Bryant took the podium. She led the symphony of brass, woodwind, and percussion instruments in Richard Strauss’ glorious “Festmusik der Stadt Wien.” It illustrated the thrilling sound this up-and-coming ensemble can deliver.

After this, Wynkoop gave an impassioned appeal for community support of the arts in education. Music especially is essential, he said on behalf of the Chorale and the Wind Symphony. “Just look around you.” he said to the capacity audience in Duke Chapel, "to see how music draws people together."

Whitacre returned to the helm and led the Wind Symphony in three of his compositions for that medium: "October," "Seal Lullaby," and "Cloudburst" (an arrangement for winds of his successful choral piece.) All three selections are beautiful examples of Whitacre's mellow, harmonically rich sound - and of the level of enthusiasm and musicianship of the members of this group.

The program ended with the Chorale and the Wind Symphony being joined by choral singers from six area high schools, about 200 voices in all. They performed the two compositions that have been done so far as a part of the Virtual Choir project. (To learn more about this incredible choral event you may want to visit this web site.)

The first, “Lux arumque” is a short, straight-forward piece, sung in Latin. The translation is “Light, warm, and heavy as pure gold and angels sing softly to the new-born babe.” The music describes the words in uncanny beauty. The second piece has an interesting history. It was written on a commission to set a Robert Frost poem to music. Once the music was completed, it was found that the Robert Frost family grants absolutely no rights to his poetry, no matter how renowned or skilled the composer may be. So Whitacre engaged the creativity of a poet friend, challenging him to create a poem of four verses in the same meter and rhyme scheme as the Frost poem and ending with the word “sleep” being repeated at the end of each of the last two lines. Charles Anthony Silvestri filled the bill perfectly with his poem “Sleep,” which is now part of a Whitacre composition that is the second work to be done as part of the Virtual Choir project.

To hear and watch these young people, their eyes glued on Whitacre, their mouths shaped to the words of the song, all together as a community; one could believe the song could “put forth roots, trunk, branches, birds, stars, . . .” – Octavio Paz, "Cloudurst," translation by Lysander Kemp.