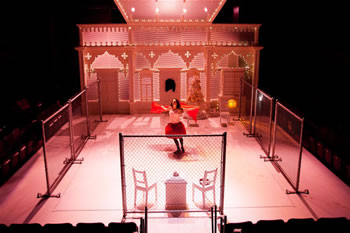 Come into the house - A Doll House, that is, Triad Stage's latest production in its 11th season.

Edgy, raw, and riveting, Preston Lane's adaptation of Henrick Ibsen's A Doll House is a must for students of classic theatre, a thrill for Triad Stage fans, and a compelling installation for contemporary art lovers.

As anyone who has watched an adaptation of a century-plus-old work knows, these productions can vary wildly from the originals. In A Doll House, Lane shows us Ibsen through a soft filter of time, which seems to only intensify the play's timelessness and the message Ibsen threw in the face of Victorian mores.

The thing that one probably notices first is that Lane has gone so far as to adapt the play's English title. He rejected the most common translation of the title as "A Doll's House," Lane wrote in his notes, taking away "the possessive 'doll's' and replacing it with a 'doll house' for a child's game that grownups should refuse to play."

This titular confidence is perhaps due to the fact that this is Lane's third world premiere adaptation of a play by Ibsen, a playwright whose work is one of the intentional cornerstones of Triad Stage, and a man who has been called the father of modern drama.

Lane is picking up where he left off with Ibsen's Hedda Gabler (2004) and Ghosts (2009), but even if theatre-goers missed these productions, they will fall under the hypnotic spell of Ibsen-via-Lane with The Doll House.

Krista Hoeppner returns to Triad Stage as Nora, the main character in this story. On the surface Nora is a cheery, superficial, self-centered (somebody stop me) even silly mother and wife. There is a thin line here and Hoeppner dances it effortlessly, showing us in no uncertain terms the absolutes with which her character must deal. But when the tone turns, so does Hoeppner's characterization and we see Nora's vulnerability, which Hoeppner pulls off like a master. There are really three Noras, all exceedingly different. This could be one of the most difficult-to-portray heroines in dramatic history, and if you miss Hoeppner's Nora, you miss an amazing performance.

Luke Robertson as Torvald, Nora's unsuspecting, full-of-himself husband, serves up a wonderful Triad Stage debut. This Yale School of Drama grad makes us believe his disbelief when his wife reveals her unsettling secret, and bares himself, figuratively and literally, by the end of the play. Hope to see more of this actor in Triad Stage's future.

Supporting characters do so with aplomb: Amy da Luz as Mrs. Linde, Nora's friend and confidant; and John Feltch as Dr. Rank, in what might be his best portrayal to date. Lee Spencer as Krogstad, Nora's dark shadow, is properly menacing, but proves that he, too, has another side.

The set, at first stunningly and indescribably white, is the brainchild of scenic and costume designer Anya Klepikov and transforms in a way that is worthy to be called a separate piece of art in itself.

As the play goes on, the set becomes strewn with the detritus of the mess that Nora has purposely or unwittingly, depending on your perspective, wrought on the family . This "painting" is so dramatic it's almost shocking and is accomplished in layers of movement. What was a sparkling photo-realistic canvas in gingerbread and lace becomes an abstract interpretation - kind of Wyeth-turned-Pollock - as the action progresses. The painting that appears on the floor gives the term "performance art" new meaning. It's a marvelous and ingenious process that takes place apart from the theatrics but at the same is a mirror image of it.

This art exhibit continues to evolve. One moment our vision into this doll house is unobscured and the next, we're staring through chain-link diamonds. The symbolism in a theatrical sense as Nora's cage might seem a little heavy-handed, but when seen as contemporary art, it's a logical progression of the chronological stages this classic has weathered and the enduring impression it has on audiences .

Just leave it to Lane & Co. to portray A Doll House in a way you've never before seen or even envisioned.

This production continues through November 6. For details, see the sidebar.