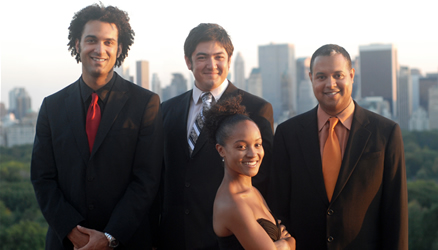 Their names are Ilmar Gavilán, Melissa White, Juan Miguel Hernandez and Paul Wiancko, known collectively as the Harlem Quartet. They play first violin, second violin, viola and cello, in that order. Note well the names, because you should be hearing (and hearing of) these players into a bright future. Although they are all young, their artistry as the Harlem Quartet rivals that of the numerous veteran chamber groups that area listeners have been privileged to hear over the years. Their appearance at Fletcher Opera Theater on an exquisite Sunday afternoon constituted the culmination of September Prelude, a four-day residency with the last two concerts under the sponsorship of the Raleigh Chamber Music Guild. (For more information on the quartet members and their visit to the Triangle, see the article in this journal dated September 8 by Karen Moorman.)

First, the somber end of a particularly wide music spectrum: listed as “In Memoriam, victims of 9/11,” the “Lyric for Strings” by George Walker (b.1922) made as profound and elegant a statement of heartbreak and anguish as anyone present had ever experienced. Although composed well before 2001, the piece seemed ideally appropriate to the occasion. The grief and outrage were expressed without mawkishness, and its realization by these players represented erudition of the highest order.

That precision was also evident in the String Quartet No. 1 in B minor (1931) by Prokofiev, especially in the insistent chords beginning the second movement. This Russian romantic work, not often programmed, was a welcome component of the afternoon. As was, also, yet another Russian offering, String Quartet No. 2 in D minor by Borodin. With its “baubles, bangles, and beads,” the lyrical work could have been inspired by Dvořák (unlikely since Borodin came along slightly before Dvořák).

Cuarteto No. Dos by Havana-born composer Tania León (b.1943) probably qualified as the “interest” work of the afternoon. This well-crafted Afro-Cuban piece was clearly not derivative and would never wear the “easy listening” label. At times one could imagine the cello playing the guitar role. The three movements were entitled “Soy!” (I am), “De vez en cuando (Once in a while), and “Son retazos (They are fragments). Would it be an overstatement to suggest that the work is experimental? (It was written for and premiered by the Harlem Quartet in May 2011 at Symphony Space in New York.)

Book-ending the program with the opening gravity was a gladsome encore, the group’s acclaimed “signature” piece. The quartet’s friend, composer Paul Chihara, has arranged Billy Strayhorn’s “Take the A-Train,” allowing each player to take turns as the baddest jazz monger in town. The crowd’s reaction could scarcely have been more enthusiastic.

Some in the audience had heard a preview of the program the evening before in the sanctuary of nearby St. Ambrose Episcopal Church. There the group presented the full Prokofiev quartet and the Notturno movement from the Borodin. Complementing these pieces were two movements from Chick Corea’s The Adventures of Hippocrates and a movement from Sinfonietta No. 1 by Coleridge-Taylor Perkinson. A mix of appealing melodies and frantic rhythms characterized the latter selection. And of course the aforementioned "A-Train" departed the station to boisterous acclaim.

Most honorable mention must go to the gracious hosts at St Ambrose. There, down an adjoining hall, were tables laden with a to-die-for spread of food and drink. At the conclusion of the program the audience was warmly invited please to participate. Common courtesy would demand that one partake liberally of what was so generously offered... - wouldn’t it?