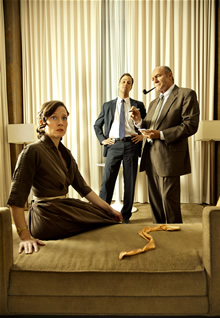 This preview has been provided by Triad Stage.

Tony Wendice has devised the perfect crime. With a lot of planning, a solid alibi and a bit of blackmail, he’s sure to make a fortune. All he has to do is kill his wife. But when his scheme goes disastrously wrong, he finds himself in a suspenseful game of cat and mouse to stay one step ahead of a determined police detective and a suspicious mystery writer out to uncover the truth. Can he still get away with murder? It’s an unexpected glimpse into the mind of a vengeful killer and the race to save his desperate victim.

Scenic designer Anya Klepikov returns to Triad Stage after designing last season’s breathtaking set for The Glass Menagerie. “Violation and voyeurism are at the core of Dial ‘M’ for Murder,” she says. “I wanted to make the audience feel like they are intruding with their gaze. The characters are vulnerable from all sides at all times.”

Director Preston Lane adds, “It’s a play that could only be written after World War II. The neat and tidy answers that we expected in our lives before World War II don’t show up. This is a play about flawed people. Everyone in the play is flawed. It is unsettling because moral certainties are not there.”

Dial “M” for Murder runs September 4 through September 25, 2011. Tickets range from $10 to $44 depending on seat location and performance desired.