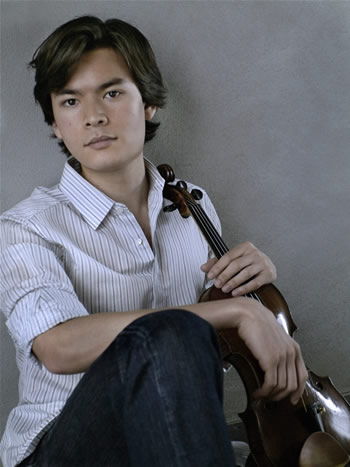 A brilliant violin soloist and a sparkling world premiere more than compensated for an accurate but somewhat pedestrian performance of Schumann’s Fourth Symphony in the third week of the Eastern Music Festival’s fiftieth anniversary season. The stage at Dana Auditorium on the campus of Guilford College was packed as the Festival Symphony orchestra was supplemented by advanced EMF students for the opening work. The elegant Chilean guest conductor, Maximiliano Valdés, conducted clearly and cleanly.

The 50th Anniversary Season has occasioned the commissioning of a number of short concert openers, including this evening’s musical apéritif, "Starsplitter," by Philip Rothman, an effervescent work belonging to the episodic “color-splash” end of the spectrum of Minimalism which currently holds so many American composers captive. Trills and thrills yielded to glissandi and musical roller-coasters, all effectively spiced with percussive effects of every genre (Mr. Rothman has studied and plays percussion). In response to a question about short episodic works being the reflection of an age characterized by the “twitter,” the composer admitted to having never composed a work longer than 16 minutes. It would be interesting to hear a work by Mr. Rothman which did not base itself on “color-splash!”

The soloist for the monumental Violin Concerto in D minor by Jean Sibelius was the twenty-something-year-old violinist, Stefan Jackiw (pronounced Ya-Keef). Cool and aloof (as the Sibelius seems to suggest) in the soft opening of the first movement, Jackiw warmed as the music did. The slow movement (Adagio di molto) was lush and the violin breathtakingly beautiful. By the time the Polonaise-like last movement rolled around, the young virtuoso fairly sizzled with musical passion as some of its Magyar style brought out the best in him - the cleanest up-bow spiccato thirds and the clearest passage of fingered harmonics I’ve heard in years!  Applause burst out from all sides, persuading the soloist to play the peaceful Largo movement from the Bach C major Sonata, S. 1005 for unaccompanied violin.

The second half of the concert was reserved for Robert Schumann’s Symphony No. 4, in D minor, actually the second of his four symphonies in order of composition, but the last to be published. Perhaps influenced by Berlioz and his notion of an idée fixe (monothematic, recurrent theme, akin to leitmotif in Wagner and Liszt) Schumann often tried to unite the movements of a larger work by “referencing” or alluding to themes from previous movements. So it is that the principal theme of the Scherzo is the same theme as presented in the introduction to the First Movement, but upside down!  And that original theme recurs in varying shapes throughout the symphony.

There was some very fine playing in this performance, by the brass as a whole (despite their tendency to overpower the strings) and by the principal cello (Neal Cary) with the principal oboe (Katherine Young), especially the third iteration of their second movement duet, where even their vibratos matched. Concertmaster Jeffrey Multer added his subtle filigree to the D major portion of the same Romanze. Intriguingly, that same filigree figure is picked up by the whole first violin section to form the Trio Sections of the Scherzo, but in B-flat major. Yet despite these fascinating cross relationships, many more than one can mention here, the performance left me strangely unsatisfied.

As I commented to a colleague before the performance, I look forward to something new, a revelation of sorts, a moment of discovery, an “Aha!” But I didn’t find that moment in this performance of the Schumann Fourth. But I was perhaps alone, because the enthusiastic audience gave the orchestra and guest conductor another one of its standing ovations.