And Cream on the Top: Paul Taylor Dance Company Completes the ADF 2011 Season 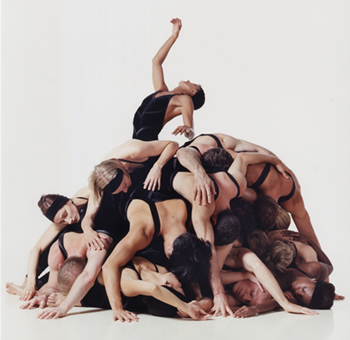 The Paul Taylor Dance Company, as it has for many years, is closing out this summer’s American Dance Festival. On the big stage at the Durham Performing Arts Center, the venerable choreographer is presenting two older works and a commissioned world premiere. A Paul Taylor performance could be compared to a complex, multi-layered torte, made by a pastry chef of the most refined sensibilities from the finest ingredients to be had. It is rich; it may be sweet; it always contains streaks and pockets of unexpected flavors. This year, it is bittersweet.

Just last year, the ADF celebrated Paul Taylor’s 80th birthday with a love-fest of performances by his company. This year, Taylor marks the 80th birthday of his old friend and long-ago colleague, ADF director Charles Reinhart, who ends his 43 years as head of the festival this year. (Co-director Jodee Nimerichter will assume full responsibilities upon Reinhart’s retirement.) Taylor is the last of the titans who created American modern dance; Reinhart is the last of the impresarios who grew up with the art form. His retirement marks a generational shift, and his importance to the cultural growth of Durham and North Carolina was marked on Thursday night by Mary Regan, director of the NC Arts Council. Speaking on behalf of Gov. Bev Perdue, Regan presented Charles Reinhart with the state’s highest laurel, the Order of the Long Leaf Pine. The governor’s proclamation spoke of Reinhart’s “integrity, learning and zeal.” Reinhart said, with his characteristic broad smile, “Thanks, now let’s get to the Paul Taylor and the dancing.”

And of course, the dancing was wonderful. The concert opens with the frothy, fun, Company B, a series of swinging dances set to WWII-era Andrews Sisters’ songs. This dance is always lots of fun to watch, but part of its purpose at the start of the program is to seduce you into letting all your defenses down, so that Taylor can wallop you with something after the intermission. (Company B got a little help in that from the student flash mob that danced for Reinhart in the lobby during the break, sweeping him into the fun.)

And wallop you Taylor does, with the new work, The Uncommitted. Danced to several pieces of music by Arvo Pärt, in a set and with costumes by Santo Loquasto, under Jennifer Tipton’s artful lighting, The Uncommitted takes you up to the very edge of love and intimacy again and again. Each time one person turns away. If it weren’t so beautiful, it would probably be unbearable. The choreography makes great use of Taylor’s great circling wheels of motion, adding a sort of whiplash of energy, which deposits a new character alone, mid-stage, as the wheeling line spins away into the wings. The lonely one will be joined for a while by another brought close on the tide of dancing — but one or the other will push away. Sometimes this happens in groups. There is no happily ever after. Fortunately, there is, the dance seems to say, the sublime happiness of art like this, in which a few moments are crafted to perfection.

The evening closes with the grandeur of Taylor’s Promethean Fire, built on the grandeur of J.S. Bach. Commissioned by the ADF and first performed here in 2002, it was also reprised during the ADF’s 2004 celebration of the Paul Taylor Dance Company’s first 50 years. Seeing it a third time is not too many. Like the haunting Bach Toccata and Fugue in D minor, S. 565, it unfolds its majesty only to those who give it repeated close attention. If you need an answer to the question of why Paul Taylor appears so often at ADF, both Promethean Fire and The Uncommitted will show you the answer.