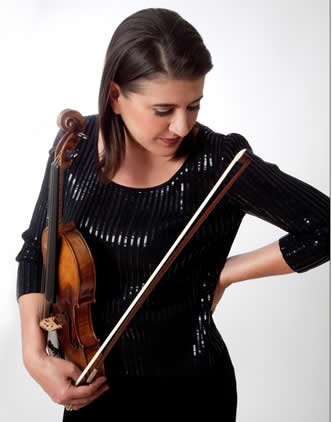 The festivities are now in high gear and everybody on the campus of Guilford College has caught the fever – the Fifty Year Anniversary fever of the Eastern Music Festival. A new work (mostly world premieres) each Saturday night, superb soloists, repertory to rave about, and a different orchestral concert every Thursday, Friday, and Saturday night! This week alone has brought us two giant concertos by Tchaikovsky: the First Piano Concerto on Thursday (see CVNC review) and the Violin Concerto on Friday. Also in back to back performances Friday and Saturday were two monumental works which emerged from Soviet Russia (despite Stalin), the Fifth Symphonies of Prokofiev and Shostakovich, fittingly chosen to celebrate the fifth decade of the EMF.

In a surfeit of exciting masterpieces, before a sold-out audience, this concert opened with a brilliant performance of Richard Strauss’ Don Juan, a musical catalogue of lust, longing, and lingering – and constant impatience for more of the same. And “more” is what the orchestra delivered – has there ever been more anticipation than of the pregnant “Ds” which start the gorgeous oboe solo (Randall Ellis) or more arrogant triumph than the signature horn call? This was a spectacular performance!

The EMF commissioned American composer Peter Boyer (b.1970) to write a brief work to celebrate the Festival’s fiftieth season. Best known for his Ellis Island: The Dream of America, and having recently composed a work commissioned for the 125th season of the Boston Pops, Boyer appears to be much in demand as a composer. Writing solidly in a tonal “American” idiom, the work he produced for Maestro Schwarz is entitled “Festivities” and was given its world premiere this evening. In the nature of an overture, it is straightforward and boldly in D major, melodically leaning toward the Celtic and leading to a pastoral middle section in F with a lovely oboe solo before returning festively to the first section. I predict a great future for the work – not terribly difficult, it should be a winner on the university and all-state circuits.

The excitedly awaited soloist for the evening was the exuberant violinist Nadja Salerno-Sonnenberg, no stranger to the Festival. An original and eclectic musician, Ms. Salerno-Sonnenberg is often a visceral and physical player, as though some ideas become too big for the instrument and need an extra thump or push or a heave. (In this vein I recall the late Rumanian conductor Sergiù Celibidache, who exhorted his students to embody the musical idea - “if the music is vulgar, be vulgar!”)  There is certainly no vulgarity in the Max Bruch Concerto No. 1 in G minor, nor in Ms. Salerno-Sonnenberg’s performance – but there was originality and daring in her approach – and she clearly enjoyed herself, much to the delight of the audience!

The work starts with a drum roll and a short phrase by the strings and then..., an open “G” with a fermata (hold) for the soloist. I have never heard this opening “G” played so long – so long that it became a musical entity, in and of itself, not just the usual beginning of something else. This was only the first of several iconoclastic musical moments. Another occurred in the second movement when she played so softly that the orchestra was forced to try to do the same to balance her. I’m sure this was the quietest an orchestra has ever played in the fifty-year history of the EMF! In my humble opinion, this was less successful, partially because of the acoustics of Dana Auditorium, otherwise excellent in the higher decibels, and partially due to the attenuating effect of a large audience. The result was a lack of musical continuity and natural flow of the phrases. Perhaps there is a balance to be struck.

Nonetheless, Ms. Salerno-Sonnenberg is a sensational violinist – gorgeous tone and vibrato, a great sense of rhythm and drama and originality. When the composer (Bruch) neglected the soloist in the meatiest part of the first movement, Nadja joined the first violins from center stage and played their juicy part and mimed the drama in the music before returning to the long “Gs” that also close the movement. (More below about her Violin Master Class held on Thursday, July 8.)

The second half of the concert was given to Shostakovich’s familiar and increasingly popular Symphony No. 5, Op. 47. This was a first-rate performance by a first-rate orchestra led by a first-rate conductor. Nothing was amiss, nothing was ajar; Shostakovich once again elicited anguish and anger in the first movement and sardonic humor or perhaps tipsy wit in the second. I was struck by the unusually legato string bow strokes in the Scherzo – perhaps music for a tipsy bear waltz. The inhabitual seating of the violins on opposite sides of the stage seemed to have no consequences on the divided string writing which characterizes the poignant and melancholy third movement, Largo, which was highlighted by exquisite woodwind solos.

The raucous tongue-in-cheek good humor of the Finale seems to ignore the sentiments of the previous movements, plunging ever forward toward a loud and triumphant finish. It was met with a true spontaneous standing ovation with whoops and cheers from the EMF students cheering their professors!

A full house attended the master class given by Nadja Salerno-Sonnenberg in the Sternberger Auditorium on the Guilford College campus on a thunderous and overcast Friday afternoon. Three violinists at various degrees of artistic development had been chosen to play for Ms. Salerno-Sonnenberg, whose task it was to work on problems, technical or musical, which seemed crucial to her, and which the other auditing violinists might well apply to their own playing. Half of the audience, however, was composed of non-students, some of whom might take tips for their own playing, but most of whom wanted to learn to know the personality of the artist and her artistic temperament. Little did we know how much humor is a part of this particular artist.

The first violinist to play was Isaac Young (16) from Waukesha, WI, who played the first movement of the Henryk Wieniawski Concerto No. 2 in D minor. When he had finished this virtuoso movement, Ms. Salerno-Sonnenberg congratulated the piano accompanist (whose name was shamefully left off the program) because “you are hard to follow,” referring to Isaac’s tendency to pace the music according to its difficulty. So they replayed long passages while Nadja clapped her hands to keep a steady tempo. Occasionally she admonished that “you’re not having enough fun!” She tried to help him do the Twist (a 1960’s dance akin to drying one’s derrière with a long towel while simultaneously putting out a cigarette on the ground with the other foot) to limber up.

Next it was the turn of Janna Martindale (20) from Woodway, TX, who played the last movement of the same concerto. Ms. Salerno-Sonnenberg then said “I’m going to get you to play loud – fortissimo – before we leave. It’s all about balance – a balance of bow speed and bow pressure, but you need them both in the equation.” They worked at it for a quarter of an hour and then worked on a closing gesture, a left-hand glissando to a high harmonic “E,” which she suggested should be no more than a pat on the butt (not her wording), or ‘Like flipping someone off.” By now the audience was waiting more to hear the one-liners than the advice, but Janna made progress and was definitely playing louder.

The third violinist, Nathan Lowry (17) from Antioch, TN, was a bit more advanced and gave a polished performance of the popular Zigeunerweisen by Pablo Sarasate. Roundly applauded and highly complimented by the artist-mentor, he was encouraged to play out more, to “be a little ballsier.” Then she said he only needed work on his spiccato, which she found stiff. Warning the general audience that it might bore them, she gave him a series of exercises to limber up his wrist.

Nadja Salerno-Sonnenberg then left time for questions, the first of which was about her violin.

“I love my violin, made in 1721. It’s used.” Roars of laughter. Then she spoke of her student days..., “... so I tried to play the last page in 30 seconds....” In the end, all segments of the audience learned much about work, humor, work ethic and keeping a perspective on music. After warm applause, the students crowded around with more questions and autograph requests from Nadja Salerno-Sonnenberg, a charismatic and eclectic role-model.