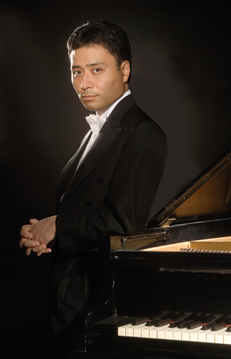 Maestro Gerard Schwarz chose two very familiar and crowd-pleasing works for the second program featuring the Young Artists Orchestra at the Eastern Music Festival, the Piano Concerto No. 1 in B-flat major, Op. 23, of Peter Tchaikovsky, and the Symphony No. 1 in D of Gustav Mahler. Though the two works date from within about 15 years of each other (the former premiered in 1875, in Boston, and the latter in 1888, in Budapest) they are light-years apart in terms of style. The concerto features the sort of finger-busting virtuosity parodied by Bugs Bunny, and even by Monty Python (anyone who has seen their version of the opening of the first movement will be cursed to remember eternally when the music is played).

I was a bit dismayed by the sheer force of the Young Artists Orchestra as they accompanied the pounding chords and immense sound of soloist Jon Nakamatsu – both soloist and orchestra produced an impressive volume, but with very little inflection. The work of the harmonie was generally fine (especially that of the first oboist), but as a whole the winds were notably sharp to the pitch of the strings and the piano, a problem likely due to the inflation in worldwide orchestral pitch standards which have been creeping up – no problem for the strings, but requiring shorter instruments for the winds. Nakamatsu showed more of a poetic side when the music moved to lower dynamics, and indeed when necessary he delivered jaw-dropping virtuosity with almost incredible speed and power in the climactic octaves of the closing Allegro con fuoco. He was properly rewarded with multiple “Bravos!” and a standing ovation from the audience.

Mahler’s First Symphony is from another world entirely, belonging to the Viennese symphonic tradition, a work of program music originally inspired by a novel, Titan, by the now forgotten (at least in the USA) German writer Jean Paul, and as one might expect from a first symphony, there are aspects that refer explicitly to Beethoven, and particularly his ninth symphony. All this by way of saying that in contrast to the wild invention of the Tchaikovsky, where more is more, Mahler develops his narrative from more economical materials, and the effect is more cinematic than virtuosic. The long tones at the opening exposed how difficult it is to tune a large ensemble, and the long-winded solos for the winds revealed that there is still work to be done in sustaining and directing long lines. Most importantly, the young players were able to follow the Maestro’s lead in giving characteristic shape to this middle-European music, with a nice stomp to the theme of the second movement, and a convincingly klezmerish swing to the faster moments of the third. The closing movement, in the manner of the Ninth, combines material from the previous ones, in moving to a thrilling and affirmative conclusion; a highly satisfying spiritual journey, and a memorable one for both the young players and their delighted listeners.