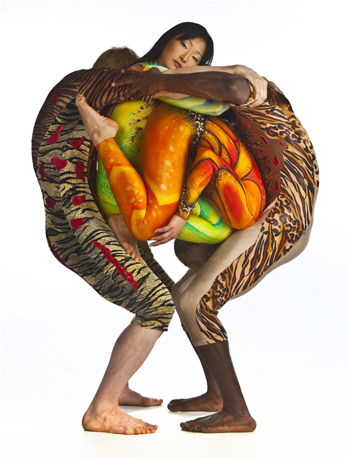 On the big stage at the Durham Performing Arts Center, American Dance Festival perennial favorite Pilobolus has returned with the collaborative company's unique form of investigative dance. This year's program is not as purely happy-making as some — the evening's first half has a dark streak that is not entirely due to Pilobolus' continuing preoccupation with shadows. The group is celebrating its 40th anniversary this year, and the show includes three world premieres that illustrate how far they've ranged from their earliest years—by contrasting them with works from 1975 and 1980.

Pilobolus is so beloved partly because they know how to be silly or serious, as the case requires, and you can depend on them to show both sides of themselves in any given evening, if not in every dance. Their earnestness is not unabated. This program opens with a serious work studded with humor of both action and image. The dance is "Untitled," but might have been called "Sons and Lovers." It is the creation of the stupendous Pilobolean team of Robby Barnett, Alison Chase, Martha Clarke (her fingerprints are all over this one), Moses Pendelton, Michael Tracy and Jonathan Wolken (recently deceased). Notable less for its shapemaking and more for its emotional intensity, it is at moments deeply erotic. The ADF commissioned this piece in 1975, and supported this year's reconstruction. There were a lot of children in the theater — probably children of children who seen Pilobolus — as well as adults who'd never had the opportunity to see this dance, which points up once again ADF's crucial role in lengthening the life-span of an ephemeral art.

As we are still trying to untangle male-female relations as presented in the untitled work, the curtain rises again after a pause, to reveal Matt del Rosario rolling onto the stage, an LED-lit miniature spaceship in hot pursuit. Seraph, here in its world premiere in finished form, is an absolutely delightful bit of play is set to the andante of Schubert's Trio No. 2 in E Flat, Op. 100. The dancing spaceships are courtesy of students from MIT, two of whom appear with the human dancer to take their bows.

The evening's big work is another world premiere, and ADF commission, Korokoro. With it, Pilobolus continues its recent string of collaborations with artists or companies outside their own collaborative circle. In this case, they have worked with Takuya Muramatsu of Dairakudakan, and his butoh aesthetic is immediately recognizable in the work. The combination with the grand healthy vitality of Pilobolus is very strange, but over the three sections of the lengthy work, one begins to appreciate what each brings to the other. At times it feels like drinking a dark, bitter tonic, but the magnificence of the moving bodies makes it go down easily.

More fun comes after intermission, with yet another world premiere. As you will be glad to hear, All is Not Lost. This is another hilarious intersection of dance and technology, which provides the troupe with yet another way of making funny sculptures with their bodies. It is sort of STREB lite, but who cares? They make a projecting kaleidoscope with lights, mirrors, a high glass table and a video camera underneath, and the dancers whirl around making quickly changing figures and patterns that you can see only on the video screen, although it is fun watching the dancers directly, too. Pure enjoyment.

The evening's final work is the wonderful Day Two, from 1980. The music's by Brian Eno, David Byrne and The Talking Heads, but the concept goes back to the Book of Genesis. However, that summary of creation forgot to mention the very thing that brings dancers back to ADF, and the ADF back to the theaters year after year: When the waters were separated from the firmament — Dance emerged. The spirit of Terpsichore awoke with that first separation of the elements.

The Pilobolus team includes a loving "thank you" to outgoing ADF director Charles Reinhart in the program booklet, for helping, over his 43-year career, their own dances to emerge. Reinhart first booked the very young company in 1973, and has brought them back to the festival ever since. Along the way, the ADF has commissioned 25 dances from Pilobolus, something for which we can all be grateful.

The evening program continues July 1 and 2, with a special children's matinee at 1 p.m. on the 2nd. It will include the delightful Seraph, and other pieces, along with an interactive dance portion for the children, and will be followed by a free party on the DPAC plaza. See our sidebar for details.