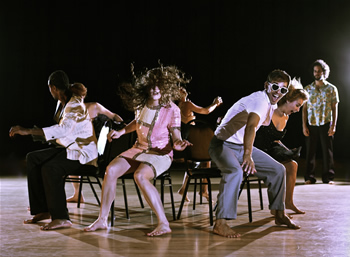 Pretty soon it will be unnecessary to use Rosie Herrera 's last name. Already among the American Dance Festival crowd, she's just "Rosie." Even on my ticket envelope for the first of her company's performances this year, in Reynolds Theater, she is a one-name artist. This is the third season in a row that the 27-year-old Miami choreographer has appeared at the ADF, and she is presenting two Caribbean-colored dance theater works commissioned by ADF — a slightly revised version of the 2010 Pity Party, and a new work, Dining Alone. Thursday night's full house was a mix of the already-adoring and astonished newcomers. You could tell them by their slack jaws and dazed expressions when the lights went up.

Rosie's dances seem to well up from the same subterranean stream of the soul that supplies the imagery of dreams. No matter how mundane or bizarre an individual scene may be, its rightness is unquestionable, and the flow of images and actions has the irrefutable logic of dreams. Creating this kind of flow between wildly disparate scenes is a particularly admirable talent; her greater one is infusing all the zany hilarity with sincere emotion. This is conceptual art in which the cool intellect serves the hot needs of the body, and is courageous enough to show us what those are.

Pity Party, for all its slightly irritating (to me) campy elements, nearly undid me this year. (Seeing Rosie's work again and again is a good thing.) I was stifling sobs behind my program — between outbursts of laughter. And after the after-dance chatter subsided, I found myself still in the grip of the residual emotion. Twelve hours later, I remain under its power. For the dance is about not just self-pity, or the pity of others for a hurting friend, but about rage and kindness and mercy and consolation and greedy gusto and flipping fate the defiant bird. It fills you with a splendid sadness and a nuanced gladness. Oh, yes: there are Barbies and Kens duking it out under a miniature disco ball (to It's My Party (I'll Cry if I Want To)), a piñata murdered in a blind rage, balloons burst in a variety of more or less salacious or sadistic ways — and some very glorious dancing, especially by the tiny Ana Mendez and the voluptuous Katie Stirman.

The new work, Dining Alone, shows considerable artistic growth in the last year, in terms of Rosie's ability to manage all her multi-media, multi-sensory elements, and clarifies some of her concerns and beliefs. Although the work is quite lovely and amazing, it does not have quite the same level of emotional after-effect, possibly due to a little structural imbalance at its close, which seemed to need another human action. Dining Alone involves any number of sequences with and by a stack of plates — very cleverly conceived and surprisingly evocative of many things. The opening is brilliant. No spoiler here, because, really, you should see it for yourself. Then, behind a scrim of pulsing stars in a velvety sky, a pianist (Duke's wonderful Randall Love) begins to play Debussy's Clair de Lune. Miracle of miracles, we hear all its romantic longing afresh, as Ana Mendez walks the moonlight mile, stepping from plate to plate as it is taken from her arms and laid before her by Liony Garcia, who then erases the dreamy path, returning the burden of white disks to Mendez' arms as she retreats backward into to her freighted reality. There are many other fine scenes, and the work as a whole is reminiscent of the marvelous Japanese film Tampopo in its connections between food, nurture, romance, sex and happiness. And it is a joy-affirming twist on the ancient command of "take, eat, this is my body which is given for you." We are all food for each other; no one can find the sustenance of life on a table for one.

Rosie Herrera and her company return to the Reynolds stage June 28 and 29. See sidebar for details.