Two Companies, Much Spirit, as the American Dance Festival Continues 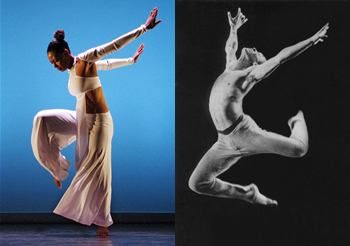 The theme of this year’s American Dance Festival is “Something New, Something Treasured,” and it is exemplified by this weekend’s offering at the Durham Performing Arts Center. Dayton Contemporary Dance Company and Ronald K. Brown’s Evidence, a Dance Company alternate for four dances in a thoughtfully put-together program that emphasizes dance’s emotional and spiritual expressivity, rather than the artists’ concern with conceptual, formalistic explorations. These dances are all about the feelings.

Not that physical prowess or style is missing. DCDC, which opens the evening with their powerful rendition of the 1959 Donald McKayle classic, Rainbow ‘Round My Shoulder, is a very strong company. Sleek, boldly muscled, extremely present and audience-connected, the dancers of DCDC excel at angular patterning, pliant partnering and launching themselves through the air in trajectories so clear you can almost see the lines drawn in space. Performatively speaking, they own this work, which the company first performed in 1987. Of the three times I’ve seen them dance it, this performance stood out for the sheer intensity of emotion projected, despite last-minute cast shuffling due to an injury. Alexis Britford, who will also take the female soloist role for the remaining performances, was luminous — equally effective in all her manifestations of the women the men dream of in their exile. Male soloists LaMoi Hedrington and William B. McClellan, Jr., ignited the air around themselves.

Rainbow ‘Round My Shoulder is an emotional piece, anyway, due to its subject matter. Maybe there is such a thing as progress: we no longer have chain gangs down on the county prison farm, working under the gun. I’m just old enough to remember hearing snatches of the kind of work songs to which this dance is set. The mournful rage coursing along their slow, unrelenting beat — the dirge-like pace of men doing hard hot work all day long — tears the heart. The traditional songs, collected by John and Allen Lomax, and arranged by Robert DeCormier and Milton Okun, are ordered so that their lyrics structure the narrative of the dance. The story is perfectly clear: “…another man done gone, down on the county farm, he had a long chain on, another man done gone.” Ambiguity in art can be a fine thing, but sometimes an unequivocal statement of great clarity can be even better.

DCDC also performed the evening’s third work, Ulysses Dove’s wonderful 1986 Vespers, set to drumming music by Mikel Rouse. Inspired by the church women Dove grew up watching, and dedicated to his grandmother, this dance is as celebratory and full of love and hopeful energy as Rainbow is mournful and outraged. The six-woman cast — augmented by the chairs with which they interact — seems like a multitude. Led by Sheri “Sparkle” Williams, with her sculpted limbs and crisp speed, these women both keep the faith and restore it by sharing it unstintingly. Pairing Vespers with Rainbow was a brilliant choice.

Between them falls Ronald K. Brown’s 2011 On Earth Together, set to a medley of Stevie Wonder tunes. This work did not seem ready for prime time. It is always enjoyable to watch Brown and his dancers — their style is very fluid and relaxed, and they emanate love and pleasure. But this choreography is so relaxed that it’s barely there, and it looked particularly boneless sandwiched between the two DCDC dances. The lighting, by Dalila Kee, is fantastic, however, and offers plenty to look at.

Brown’s second work, which closed the evening, was very strong. Grace was originally choreographed in 1999 for the Alvin Ailey Dance Company and revised in 2004 after it came into Evidence’s repertory. Like Vespers, it is about the beneficence of spiritual love, and also — fortunately — like Vespers, it has both clear structure and dynamic movement language. Here you see Brown’s comfortable style at its best, can see how inventive he can be within it, how skilled and emotive the dancers can be, and how generous they are with their grace. No one left the theater without a smile.

The shared program continues June 24 and 25. See sidebar for details.