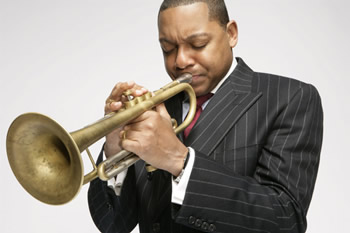 The Jazz at Lincoln Center Orchestra concert in Dana Auditorium at Guilford College began at eight o’clock sharp. At seven fifteen a fairly large crowd had already gathered at the front entrance. The mood was festive and wine and snacks could be purchased from a tent on the lawn.

The welcome was given by College President Kent John Chabotar who pointed out  Wynton Marsalis attended Eastern Music Festival as a young student for two years in 1976 and 1977, and returned in 1985 as a professional musician to teach a master class for EMF young artists. In personal remarks Marsalis spoke very highly and almost reverently about the impact of that experience both on his life as a musician and as a person. It was his first time away from home and was a wonderful opportunity to study with the host of talented, bright, and passionate young students from all parts of the U.S. He marked that experience as a pivotal point in his career and, judging by his accomplishments, he has certainly made great strides, having already been awarded nine Grammy Awards and the first Pulitzer Prize in Music for a jazz recording.

One EMF experience that apparently has had a lasting impact was revealed when he announced that he lost a trumpet concerto contest, “in this very auditorium.” Wynton made some playful, and audible off-microphone comments, something to the effect that he felt he should have won, and “We’ll see who has the last laugh.” I’m speculating here, but given his highly competitive nature, the word that came to mind was redemption. Was it possible he intended to wipe out that bitter taste with this performance? Even though his comments were said in jest, the performance he prepared was no joke.

If this had been an orchestra competition, the JALCO would have won hands down. Every element of musical performance was demonstrated at the highest degree; from tonguing technique, to long sequences of notes played by various sections at blazing fast tempos, with impeccable timing, strange meters, unusual rhythmic patterns, perfect intonation among the sections and the soloists, expression, tone, etc. Not that he needs redemption, but if he did then he, “totally did!”  I was left with the impression that I was watching and listening to the “top of the food chain” in Jazz.

The first set was dedicated to compositions by Thelonius Monk, one of North Carolina’s great jazz icons, and perhaps one of the most difficult jazz composers to fathom. He was considered avant-garde in his heyday. There was no written program, and Wynton made announcements from his position in the trumpet section rather than out front, so the audience had no idea what they were going to hear. I was surprised that I only recognized one of the four selections. Thanks to a complete list of his compositions on-line at Monkzone I was able to find some pertinent information.

The first piece was titled “We See” and was arranged by alto saxophonist Sharwood Irbie with solos by Sharwood and Wynton. “We See” was first recorded on May 11, 1954 (Prestige PRLP 180.)

The second piece (the one I knew) was titled “Epistrophy,” arranged by trombonist, Chris Crenshaw, featuring solos by Chris and Ted Nash on alto sax. "One of Monk’s earliest compositions, it was co-written with drummer Kenny Clarke and went by various names; also known as simply “The Theme” since it was used by Minton’s House Band to open and close a set. It was first recorded by the Minton’s House Band on June 7, 1941, but the first version by Monk appeared on his first Blue Note recordings (July 2, 1948, Blue Note 548, 1510).”

The third piece was “Light Blue,” arranged by Vincent Gardner with a nice steady 4/4 feel, featuring a mellow tenor sax solo by Walter Blanding. “The first recorded evidence of this tune comes from a radio broadcast from Pep’s Music Lounge in Philadelphia, where Monk led a trio on February 9, 1957, consisting of Jimmy Bond on bass and Albert 'Tootie' Heath on drums. Interestingly, the first official recording of 'Light Blue' was also live, this time at the Five Spot Café on August 7, 1958.”

The last was titled “Four in One,” arranged by Chuck Israel. It opened with a duo featuring Wynton with high squeals from the trumpet and Carlos Henriquez on bass, then followed by trombone, baritone and bass saxophone solos. "First recorded on July 23, 1951 (Blue Note 1589),  "Four in One' was known to have a particularly treacherous melody built on sixteenth note phrases (hence the name - a quarter note [one ‘beat’] divided into sixteenth notes [four ‘(little) beats’])."

The avant-garde angularity of the music, the total mastery of the complex, the creativity of the arrangements, the extraordinary solos, and the over-all excellence of the performance for the entire first set was in many respects overwhelming and difficult to describe. For some concert-goers it was a challenge, but no one doubted they were experiencing music of the highest order, and they were truly appreciative.  During intermission conversation was animated and pleasant, and I overheard a lady comment aloud that she thought she would see more of Wynton in front of the band (perhaps, as she remembered from the big Band era?).

Wynton, totally aware that the first set was a mind bender, promised that the songs on the second set would not run as long as those in the first. There was to be an after-party so he selected dance music to get everyone in a party mood. There was a collective sigh of recognition as the second set opened with the familiar “April in Paris,” arranged by Count Basie, and featuring a fine trumpet solo by Kenny Grantham, ending with the call for “one more time” phrase at least four times. The ease with which the orchestra shifted into this style, served to reaffirm and heighten the remarkable nature of the music of the first set.

The third was the result of collaboration with the Museum of Modern Art based upon the paintings of Stuart Davis, a painter and jazz lover. The piece was composed of three movements named for his paintings: “Mellow Pad,” which featured an amazing wah-wah trombone solo by Elliot Mason; “Garage Lights,” featuring Marcus Printup on trumpet whose solo demonstrated amazing purity and clarity of tone and expression at ranges above the staff. He received a solid round of applause for his effort; and “New York,” featuring the artistry of Dan Nimmer on piano that included some references to Monk during his solo.

The fourth was “Sunset and the Mocking Bird,” by Duke Ellington. A very mellow arrangement featuring a great baritone sax solo by Joe Temperly.

The very last song of the evening was “Braggin’ in Brass,” written by Duke Ellington in 1938. It was the perfect closer. A very up-tempo piece that featured an impossible section in which three trombones play a series of triplets (spoken tu-tu-ku continuously) with trombone No. 1 playing the first tu, trombone No. 2 playing the second tu, and trombone No. 3 playing ku at a blazingly fast tempo. The timing required is phenomenal. And it was appropriate that Wynton, who was phenomenal all night, finished with, what was to me, his absolute best solo. It was a great evening all around.