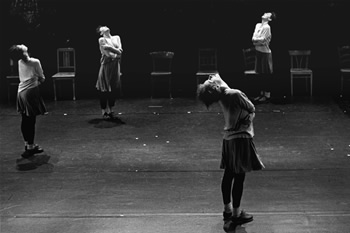 Rosas Danst Rosas, which opens the American Dance Festival 2011 in Reynolds Theater, is definitely not for people of any age with attention deficit disorder. You must give yourself over without expectation to this masterwork of post-modern dance with a cultivated attention. Otherwise, it could irritate you into exiting the theater. But if you let it, the dance’s repetitions and variations induce a meditative trance, and leave behind the deep satisfaction of aesthetic completion.

Rosas Danst Rosas was choreographed 25 years ago by Belgian artist Anne Teresa De Keersmaeker, to whom the ADF will award, on June 11, its prestigious and valuable Samuel H. Scripps ADF Award for lifetime achievement in choreography, during her company’s first appearance at the festival. Rosas Danst Rosas — a very early work — has remained in the repertoire of her then-new, four-woman company, Rosas, ever since, and the now-large, established company has been touring a fresh, vital, 100-minute presentation of it since 2009. During its first minutes, while an increasingly loud sound like a cross between a metronome and a train fills your head, you may question whether the dance will be worth your time, but soon in the subsequent silence you will begin to hear the music generated by the four bodies in action.

On a stage sparely designed by De Keersmaeker, yet active with ripple and reflection, and lit with a panoply of unusual effects by Remon Fromont, the four women appear, grouped together upstage, backs to the audience. The stage behind them is dark; light rims their forms, and wavers over a pleated back wall. They stand, still, silent. The audience settles into a corresponding stillness. Then — the women fall backwards, and in falling, turn, settling on their sides, heads toward the audience.

Eventually they begin to move, and perform the entire first section without standing. With movement that is both liquid and snappy, they create a string quartet of sounds as they drag, flip and pound bodies and limbs in sympathetic unison. The mechanical repetitions are not those of automatons—these are live, individual women, dancing with each other, as a series of highly female and feminine gestures and positions clearly shows. The dancers divide and regroup in different variations as they move across blocks in an invisible grid, gradually angling downstage. As with the subsequent sections danced with music, each time you are thinking you’ve just about had enough of this particular repetition, it modulates. The timing is impeccable.

The music, composed contemporaneously with the choreography, by Thierry De Mey and Peter Vermeersch for four musicians, is deliciously Reichian (De Keersmaeker has worked extensively with music by Steve Reich). As it began, and the dancers, now upright, continued, at a different angle, essentially what they’d been doing before, I experienced an almost magical sense of backward vision — as if the music were shining a light down the already-dark hall of recent memory, illuminating the “silent” dance with a flood of understanding.

The work ends with a brief silent coda, which does not work as perfectly as the rest, coming as it does after the crashing ending of an extended, almost ecstatic, rousing rapid rhythmic tour de force. Although intellectually the coda fit, and in thinking about the whole shape of the work, I would be sorry if it weren’t there; dramatically it was tough to get back to the slow gesture, space and silence after the whirlwind. This is a quibble. This artwork filled me with a happiness beyond emotion or meaning. If this is the quality, the passionate quality, we can expect for the rest of the ADF season, it is going to be a glorious summer.