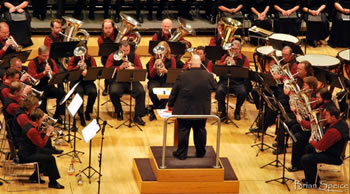 Almost a week ago, young wind players from a high school in northern Wake County entertained a Raleigh audience. (see our discussion of Wakefield High School Wind Ensemble performance.) A like set of musicians from nearby Rocky Mount, the Northern Nash High School Wind Ensemble, have now followed suit. Those music lovers who ventured out to Meymandi Concert Hall on "a dark and stormy night" were treated to a fine display of talent and hard work by these Nash youngsters. Their appearance in Raleigh was sponsored by the Triangle Brass Band, a group well known and highly celebrated hereabouts.

Director Erik Harris opened with a Grundman arrangement of the lively and familiar Overture to Bernstein's Candide. These fifty or so players then made room for a large contingent of their more junior colleagues as Assistant Director James Boyce led the combined forces in the "Declaration Overture" by American composer Claude T. Smith. No loss of energy ensued as these younger players showed fine promise.

Harris returned to lead the elegant and touching "Tribute" (2006) by Travis Cross of Virginia Tech. Jay Bocook, onetime Furman University faculty member, has arranged a wind version of the Shostakovich Symphony No. 5. The Finale of this huge work probably constituted the players' best work of the evening. The exciting and boisterous sound was veritably "symphonic." All sections of the ensemble showed enthusiasm and excellent preparation for this great modern masterpiece.

One of the truly stellar names in band repertory was not to be neglected. The ensemble closed with a Frederick Fennell arrangement of "Wedding Dance," imparting the requisite humor and vigor to this festive piece.

The "pros" came on after intermission as Director Tony Granados led members of the Triangle Brass Band in yet another Shostakovich offering, carrying that composer's "Folk Festival" to its frenzied windup.

Granados chose to honor his high school guests with two works. The somber "American Elegy" by Frank Ticheli commemorated the Columbine school tragedy with strains as stirring and heart-rending as anyone present had likely ever heard. Integral to this piece was the solo work of principal cornetist Lisa Burn. An especially haunting and effective off-stage, distant cornet (voices of the departed?) complemented the on-stage section of the solo. The second nod to the guests was Karl King's "Melody Shop," a showpiece (with Jesse Rackley's euphonium) seemingly designed to "show how it's done."

In the five-movement work, Cat Tales, by Peter Graham, each movement name is a clever word-play on the subject matter. "Catalonia" evoked those rhythms one associates with old Spain. The jazzy "Catwalk" led into the presto character of "Scat!" The "Catnap" featured crying smooth trombones, and the "Toccata" brought all sections together in a cataclysmic conclusion.

Please offer much thanks to Granados and the Brass for sponsoring this fine combination of beginners and veteran players. No less salute is due Erik Harris and Northern Nash High School for the skilled and energetic efforts of these players whose work and dedication will enhance the future of fine music.