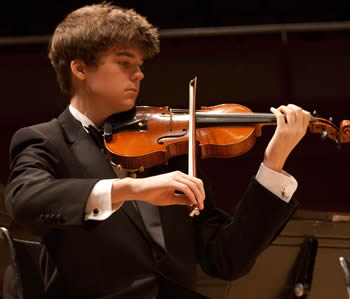 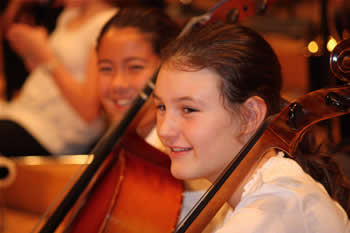 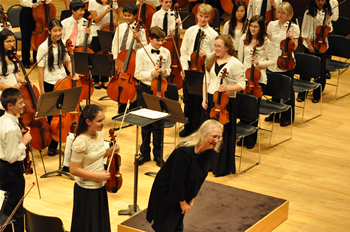 In its twenty-three years of existence, the Triangle Youth Philharmonic has probably never had a more enthusiastic audience. The Sunday afternoon crowd at Meymandi Concert hall loved every moment of this "senior" ensemble, the top group of the Philharmonic Association as measured by experience, attainment, and seniority. (A pre-concert lineup of all those players with perfect attendance was a thrill to behold, testifying as it did to their admirable attitude.)

To open, Conductor (and Artistic Director of the Association) Hugh Partridge chose Ancient Voices by R. Michael Daugherty, an accomplished contemporary composer and special friend of the Association. The titles of the three movements are quotes from Caesar, Lucretius, and Horace. This piece calls for large forces, including harp. The overall effect was pleasantly romantic, with bits of modernity marbled in. The beginning Caesar movement bore resemblance to the melodic flavor of works by Vaughan Williams and Eric Coates, no minor accomplishment.

Displaying the technical skills and stage presence of a pro, concertmaster Carter Coleman pleased the fans as soloist in Saint-Saëns' Third Concerto for Violin, Op. 61, first movement. His remarkable artistry was a real pleasure to hear and to observe, doubtless causing many to wish he and his colleagues had waded on into the stirring slow movement of that same piece.

"Ah, but a man's reach should exceed his grasp…" Did ever a young group embark upon a more ambitious (rash?) enterprise than Mahler's monumental Symphony No. 1? Despite the long reach, Partridge and these players found much of the challenging work within their grasp. They shone most brightly in the abundant forte passages, and particularly so with the funeral (fugal) march of the third movement. To judge from the enthusiastic response of the audience, the essence of this exotic, "Titan-ic" work was retained. From among numerous worthy honorees, the conductor rightly singled out the horns and the violas for their contribution.

May 10, 2011, Raleigh, NC: As a Tuesday evening follows a Sunday afternoon, so do the farm teams follow the majors to demonstrate their skills, all within that same Meymandi venue to similarly enthusiastic audiences. The work of the Triangle Youth Orchestra and the Triangle Youth Symphony suggested that the more senior Triangle Youth Philharmonic had little to fear from losing some of its star performers to graduation. These younger players should be able to fill those gaps most capably.

Opening with the most "junior" performers (TYO), conductor Tim Kohring chose a Philip Gordon arrangement of the Queen Anne Suite (based on music by John Eccles, John Blow, and John Barrett). This little three-movement work was as winsome as was the stage full of miniature musicians performing it. Indicative of careful and effective training, their deportment and attention to the director were exemplary throughout.

They successfully negotiated the first movement (Allegro con brio) of one of Mozart's more familiar pieces, Symphony No. 25. They captivated the crowd with a game treatment of the "March to the Scaffold" movement from Berlioz's eerie Symphonie Fantastique. The work of the high strings in the former and the cellos and basses in the latter testified to the excellent work of String Specialist, Connie Lorber.

Two conductors shared duties with the TYS. Marta Findlay-Partridge opened with perhaps the Association's "signature" piece, Festive Concert Overture by Tom L. Lohr. This Meredith College faculty member composed the work to mark the twentieth anniversary of the organization. As if deliberately designed to feature each section at one time or another, its numerous charming melodies build up to a rousing conclusion. She continued with Hugh Partridge's arrangement of the Bach Cantata in D, S. 80, "A Mighty Fortress Is Our God."

For something a bit different as well as entertaining, the group launched into an Alan Hovhaness composition. "And God Created Great Whales" gave the players a chance to shine with wonderful sound effects, particularly as the strings brought in the tides and surf. Precision was required and attained as they synchronized with electronic whale sounds (sometimes slightly protracted in duration).

Guest conductor Tonu Kalam, from UNC-Chapel Hill, led the closing Tchiakovsky Romeo and Juliet Fantasy Overture. Here the players were at their finest, bringing out all of the drama of this lush workhorse piece. Who could resist humming "Our Love" as they revisited that theme again and again?

So three full-size orchestras (though not all were full-size musicians!) in two concerts have left lovers of fine music with a feeling of optimism for the future of the art form.