The Fire Pink Trio Lives Up to its Name 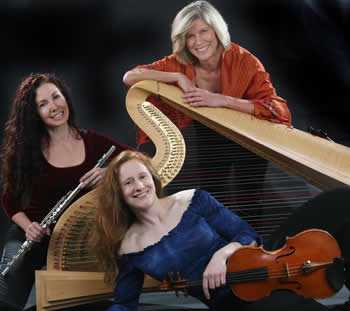 This preview is provided by Raleigh Chamber Music Guild.

Named after the beautiful North Carolina wildflower that covers the mountains in late Spring, Fire Pinks resemble the strokes of a painter's brush, a symbol of creativity and fresh, new ideas to the members of the trio.

Fire is the energy that the trio felt upon playing together for the first time.

This dynamic and poetic trio combines three sensual instruments: harp, flute and viola. Just as each instrument has its uniquely beautiful voice, each member of Fire Pink Trio brings to the group a multitude of accolades including top prizes in international competitions, concerto performances and critically acclaimed recordings. Performing music from Romantic to Contemporary, Latin and Jazz, Fire Pink Trio brings energy, elegance, style and virtuosity to the stage.

Hailed for her breathtaking technical skill, intoxicating musicality and deep interpretational understanding, flutist Debra Reuter-Pivetta enjoys a diverse career as soloist, chamber artist, orchestral player, and teacher. A winner in the 1999 Concert Artists Guild Competition, she was the first ever recipient of the Community Concerts Performance Prize. Her other honors include top prizes in numerous competitions including the Louise D. McMahon International Music Competition, the National Flute Association's Young Artist Competition and the Flute Talk Competition. Ms. Reuter-Pivetta has performed as concerto soloist with many orchestras including the International Music Program Orchestra on a tour of Italy, Switzerland and Germany, the Western Piedmont Symphony Orchestra, the Lawton (OK) Philharmonic, the Winston-Salem Piedmont Triad Symphony and the Greensboro Symphony Orchestra. Ms. Reuter-Pivetta is a member of the newly formed flute, viola and harp trio, the Fire Pink Trio. Debra Reuter-Pivetta has recorded works by Böhm, Bozza, Saint-Saëns, Guiot and Burton with her husband, pianist Federico Pivetta. Their critically acclaimed CD is entitled "Passion and Romance," and has aired frequently on public radio stations across the country. Recent highlights for the Pivetta Duo include the Dame Myra Hess Concert Series in Chicago, Community Concerts showcases in New York City and Charlotte, recitals in northern Italy and an extensive concert tour performing in 75 cities nationwide. Debra Reuter-Pivetta is the principal flutist with the Greensboro Symphony Orchestra and the flute instructor at Salem College.

Violist Sheila Browne has performed in many of the world's major halls as soloist, chamber musician, and as an orchestral principal. She has soloed with the Juilliard Orchestra, Kiev Philharmonic, New World Symphony, South African International Viola Congress Festival Orchestra, and the Viva Vivaldi!, Reina Sofia and German-French chamber orchestras. She is a member of the newly formed flute-viola-harp Fire Pink Trio. She has recorded concerto, solo and chamber works for the Nonesuch, Sony, Albany, Centaur and ERM labels, and has premiered a concerto written for her at the most recent international viola congresses in Australia and South Africa. The only viola finalist in the 2004 International Pro Musicis Solo Awards at Carnegie Hall, Sheila is a graduate of the Juilliard School, MusikHochschule Freiburg and Rice University. She was Karen Tuttle's teaching assistant for four years as well as a student of Kim Kashkashian, Karen Ritscher's teaching assistant, and Paul Katz was her quartet mentor. She has performed in many festivals including Banff, Donaueschingen, Evian, Great Lakes, Jeunesses Musicales, Kneisel Hall, Music Academy of the West, Port Townsend, Sun Valley, and Tanglewood. She has given recitals and /or masterclasses at many schools, including Eastman, McGill, Oberlin, Duke, and Boston University. She was appointed to the University of North Carolina School of the Arts faculty in 2006, New York University faculty in 2009 and is on the Executive Board of the American Viola Society. She is the first viola professor ever to teach in Iraqi Kurdistan at the National Youth Orchestra of Iraq. She also teaches at California Summer Music, Green Mountain Chamber Music Festival and Viva Virginia!. Upcoming projects include a Vivaldi-Primrose viola concerto recording, a solo CD, and performances with Joe Robinson, Arnold Steinhardt, and Shmuel Ashkenazy.

Jacquelyn Bartlett was born in Detroit , Michigan where she was surrounded with music since her beginning. Her mother, Mary Bartlett, is a noted harpist, arranger, composer and teacher and Jacquelyn began her musical studies at an early age with her mother. After continued studies with world renowned harpists, Carlos Salzedo and Alice Chalifoux, Ms. Bartlett, at age sixteen, made her solo debut in Chicago's Orchestra Hall in a performance of the Handel Harp Concerto which received high critical praise. She graduated with honors from Interlochen Arts Academy and then attended Oberlin Conservatory of Music where she majored in harp and minored in piano. Her harp teachers also include Lucy Lewis, Lucille Lawrence, and Susann McDonald. Subsequently, Ms. Bartlett was invited to perform with many of the world's leading orchestras including the Detroit Symphony, the New York Philharmonic, the Indianapolis Symphony, the Rotterdam Philharmonic, the Baltimore Symphony, the Kansas City Philharmonic, the North Carolina Symphony, and the Milwaukee Symphony working with some of the world's most distinguished conductors such as Eugene Ormandy, Sixten Ehrling, Sergiu Commissiona, Aaron Copeland, James Paul, Izler Solomon, and Pierre Boulez. Having toured America and Europe as a soloist and chamber musician, Jacquelyn has also appeared frequently at American Harp Society Conferences and the World Harp Congress as a speaker and a performer. Having served on the faculties of Duke University and the University of North Carolina, Ms. Bartlett currently is a member of the Artist Faculties of UNC-Greensboro, North Carolina School of the Arts and Appalachian State University with an additional private studio in Charlotte, NC. She is much sought after as a teacher and coach and her students have garnered top prizes at national competitions and have been featured in Europe at the World Harp Congress and on Christopher O'Reilly's National Public Radio Show, "From The Top." A champion of chamber music, Ms. Bartlett continues to work with today's composers to bring new compositions to the concert stage. For ten years, she was the Founder and Artistic Director of SummerMusic, a chamber music festival in Blowing Rock, North Carolina . She has also written and published articles in professional journals, has edited music for publication and is a recorded artist on the ALBANY and NAXOS labels.