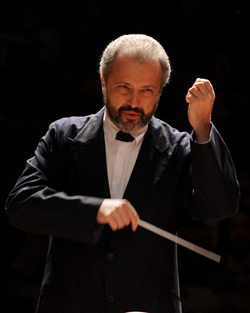 A trip to Salzburg completed the “Grand Tour of Europe,” the season’s theme of the Masterwork Series of the Greensboro Symphony Orchestra which meant an all-Mozart program featuring the scurrying Overture from The Marriage of Figaro, the 5th Violin Concerto, and the great Requiem.

The evening opened with the Overture, conducted by this year’s winner of the 2011 GSO Keep Kids in Tune Raffle André Lash (actually someone else’s name was selected, but that person gave Lash the honor of leading the ensemble). Lash is no stranger to music, as he is both on the faculty at UNCG’s School of Music, Dance, and Theatre as well as Organist and Director of Instrumental Activities at Christ United Methodist Church. His conducting style is more practiced for choir, but he did a fine job of leading the GSO in a bright and cheery manner; his direction was always focused on the tune, whether in the winds or the strings. The orchestra played well under his baton with good spirit.

GSO Music Director Dmitry Sitkovetsky was both soloist and conductor for the concerto, leading a much-reduced orchestra (only oboes, horns and strings). The 5th concerto was Mozart’s last one, penned when the composer was 19. The three-movement work is fun, full of verve and energy that both orchestra and Sitkovetsky brought out. Lyric tunes were balanced by folksy sections and quasi-dramatic passages. Ensemble between soloist and orchestra was tight, and Sitkovetsky’s playing was crystalline.

Mozart’s Requiem Mass in D minor,K. 626, was left incomplete when the composer died; the composition was subsequently completed by his students. Joining the GSO were the Choral Society of Greensboro (under the direction of Jon Brotherton) and four soloists, all faculty members at UNCG: soprano Carla LeFevre, mezzo soprano Clara O’Brien, tenor Robert Bracey, and bass Donald Hartmann. On the podium was Sitkovetsky, who seemed to go especially for the solemnity and grandeur in much of the score.

The Choral Society is an ensemble of close to 100 singers, and in the loud passages, the chorus provided plenty of sound with clear enunciation and good energy. Obviously well prepared, the choir responded to Sitkovetsky’s urgings and pleadings. Especially noteworthy were the “Dies irae” (“Day of wrath”) and the fugue in the “Kyrie eleison,” which also concludes the entire work.

All four soloists were impressive. LeFevre’s liquid lyric voice, first heard in the beautiful “Te decet hymnus,” was lovely throughout. O’Brien’s rich timbre was an essential part of the frequent ensemble numbers including the “Recordare, Jesu pie.” Bracey’s robust and clear singing was strong and easy to hear; Hartmann has a hearty and dramatic quality. All four were spotlighted back to back in the “Tuba mirum.”

Leading the large number of musicians taking part in any production of the work — 100-voice choir, 4 soloists, continuo (played by André Lash) and an 80-piece orchestra — must be akin to driving a Mac truck. For the most part, Sitkovetsky kept the reins taut and the forces under control; only occasionally did ensemble or intonation become an issue, such as the outset of the “Recordare,” when the cellos, organ, and the rest of the group had differing opinions about tempo and tuning. All in all, though, it was a splendid evening of music, featuring some of the great music penned by one of the greatest composers of all time.

A few personal observations are in order. The music didn’t start for at least 15 minutes after 7:30. Part of this is because the audience doesn’t show up in time to be seated by 7:30, but also because it has become necessary to begin each concert with a “thank you” to the sponsoring organizations. I am appreciative, as is most of the audience, to corporations and businesses that help sustain the arts in our community. However, it seems most inappropriate for that business to use the thank-you for a detailed advertisement for its services.

One more thing: since the program was different from the one printed in the season playbill, an insert was provided which gave the current program as well as bio info for the soloists and choir master, and the translation for the text of the Requiem. Unfortunately, the 5th (Sanctus) and 6th (Benedictus) were left out.