Oklahoma! Is a Hit From Start to End - Don't Miss It! 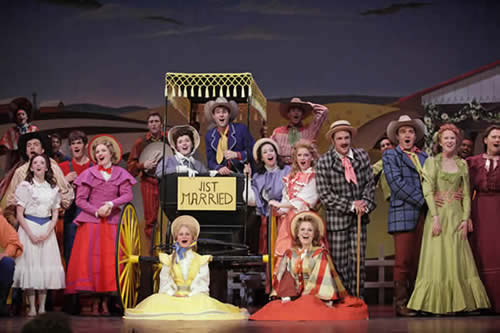 
The cast of Oklahoma!

A growing buzz of anticipation invaded the lovely Joan Hanes Theater of the University of North Carolina School of the Arts Stevens Center Wednesday for the pre-opening of the UNCSA's restoration of the original production of Richard Rodgers' and Oscar Hammerstein II's monumental Oklahoma! The "campus night" performance always overflows with students, faculty, and parents impatient to see their favorites on stage. Indeed, the spontaneous applause that greeted the "house-to-half" dimming of the overhead lights drowned out all but the last words of the pre-recorded safety message which, in hindsight, should have ended with "please fasten your seat belts!"

This Oklahoma! is no "student" performance but one worthy of the best professional theater in any major city in the country – first-rate acting, singing, dancing, and playing made this event the major entertainment event of the season, bar none! Totally a UNCSA production, the cast includes three faculty members, several alumni, a host of hot student dancers, singers, and actors, and a 28-piece student orchestra which sounded fully professional.

Upon the opening of the curtain, one is struck by the set, a caricature of the Great Plains, painted with exaggerated perspective in flat colors, almost as though block printed. I remember my parents' first gramophone album of Oklahoma!, six very breakable 10" records, with a three-color picture on the outside, just in the style of the very successful sets of the current production.

At the curtain, UNCSA drama teacher Caroline Kava is the epitome of the frontierswoman - sensible, bold, witty - and ornery!  Her character, Aunt Eller, manipulates the entire crowd of farmers and cowboys all the while cajoling and consoling the leading lady, Laurey, spectacularly played by Rebecca Moyes, and counseling her inevitable hero, Curley (Kyle Guglielmo), equally impressive.

The plot was convincingly rendered by the two protagonists, ravishingly beautiful Rebecca Moyes, nearly a coloratura soprano (Laurey), and handsome and pale Kyle Guglielmo (Curley), a delightful baritone. The antagonist, a hired hand with dark and secretive motives, was played by bass-baritone Braxton Molinaro (Jud Fry), a man with a great voice and a huge future. It is basically a love triangle with complications, but Hammerstein has interwoven the main story with a delightful web of sub-plots, also love-triangles of sillier proportions and goofier outcomes.

The very success of the sub-plots, balancing the melodrama with comedy, makes the main plot difficult to sustain. These comic sub-plots stood out by virtue of the excellent acting and singing of the characters, irresistible Jennifer Webb as Ado Annie, the "Girl who can't say no," and Adam Levinthal as Ali Hakim, the peddler whose "Persian good-bye kisses" titillated off-stage as well as on!  Sparring partners with them are neighing Gertie (Diandra Langenbach) and Will Parker, who provoked more laughter than any other character, except perhaps his eventual wife, Ado Annie. And he led an excellent tap-dance number with the male members of the cast to a greatly developed sequence based on "Kansas City."

Dance was well represented throughout the evening but especially in the lengthy "Dream Sequence" near the end of Act I. Alter-egos in dream land – Jillian Ratledge as Laurie, Tommy Burnett as Curley, and Gabriel Arant as the ill-fated Jud – turned a courtship into an ominous nightmare.

Euphemistically called Postcards (as in "French postcards") in the play-bill, Leslie Williams, Shannon Scholars-White, and Lauren Haug danced provocatively to music from waltz to tango, bedecked in gorgeous costumes during the later part of the "Dream Sequence."

The musical numbers are beloved, and Richard Rodgers is a revered member of the pantheon of 20th-century composers, but delightfully surprisingly is the delicious complexity of the intervening script, so full of witticisms, slap-stick comedy, and occasional one-liners. The development of the plot line and the texts and lyrics are a testament to the genius of Oscar Hammerstein II.

Terrence Mann, one of UNCSA's best known laureates, directed the production with the perfect dosing of cowboy rowdiness and subtle, often witty, sometimes tender, delicacy. When the screen-door slammed shut on our heroine's skirt, I and the entire house thought that it was a stage mishap. But the earnestly painstaking release of the skirt by another cowboy made it into a pricking-the-bubble-of-pride moment for Laurey and a lump-in-the-throat-but-I'm-laughing-too-hard-to-cry moment for the rest of us.

A large part of the significance of restoring the original performance is the restaging of the original ballet sequences by Agnes de Mille, which have frequently been omitted or re-choreographed by others. Ms. de Mille has had a long history with the UNCSA founders and dance faculty. These dance sequences, scattered throughout the musical, all seem to take their inspiration from the horse, symbol of the Wild West, with pawing, prancing, shying off to one side or the other and sudden stops, as though being reined in. This is vintage de Mille, including the flapping and fluttering of the arms and hands. [This writer once had the privilege of conducting the UNCSA student performances of Copland's Rodeo, staged by Ms. de Mille in her original choreography for the UNCSA School of Dance.]

UNCSA sought advice from experts in all aspects of the production, notably from Gemze de Lapp, who danced in the first national production and went on dance almost all the feminine roles in subsequent years. Another unlisted behind the scenes expert is Scott Tilley, also a (U)NCSA alumnus who, working for the Rodgers and Hammerstein enterprise, worked with the original Robert Russell Bennett manuscripts and helped generate a computer-engraved full score and set of parts.

Chancellor and Maestro John Mauceri had reason to look pleased – his well-rehearsed musicians in the pit played superbly (if a bit assertively), allowing him the luxury of elegant supervision of the performance as a whole – instead of the frantic passion-generating traffic cop often found leading student productions. The amplification of the stage characters – a necessity, considering that they often must turn away from the audience – was subtly done, whereas the amplification of the orchestra, which ideally would be undetectable, sometimes overwhelmed the middle and low voiced singers.

The overflow audience did more than its part, clapping along and trying to interrupt sequences to show its appreciation with applause. They knew a good thing when they saw it!  To quote another Rodgers and Hammerstein collaboration, the musical film, State Fair (which had a stage performance on this same hall in 1996), "… don't miss it, don't even be late!"

Oklahoma! continues through May 8. For details, see the sidebar.